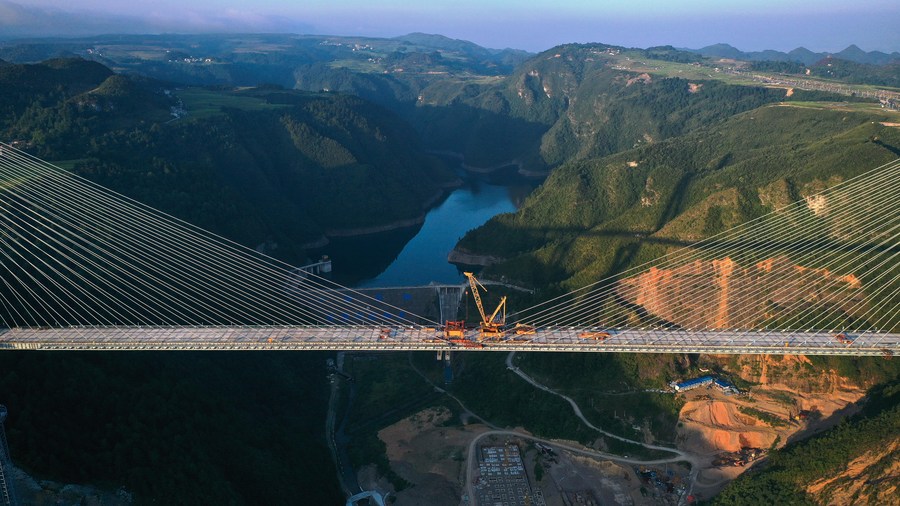 A fresh move came as a State Council executive meeting announced last week that the quota of "policy-backed and development-oriented financial instruments" would be expanded by another 300 billion yuan (about 43.6 billion U.S. dollars) to better fund major infrastructure projects.

Prior to this, 300 billion yuan in total had already been allocated via such instruments, namely two funds operated by the China Development Bank (CDB) and the Agricultural Development Bank of China (ADBC), respectively.

Introducing how the instruments work, Zhang Hui, executive vice president of the CDB, said that the aforementioned fund run by the policy bank comes from multiple sources, including the issuance of financial bonds.

The fund contributes as much as 50 percent to the capital base for an infrastructure project, while the remainder is financed by project initiators and social capital, Zhang said.

A case in point is a new highway construction project in the eastern province of Zhejiang, where some 6.3 billion yuan was required for capital base.

"Our financial strain in the early stages was greatly alleviated thanks to the 1.8 billion yuan from the CDB fund," said Li Feng, chairman of the relevant construction company. Li added that construction is set to kick-start next month as the rest of the financing has been put in place.

Projects eligible for funding need to have considerable social benefits as well as economic profitability, Zhang said. He stressed that the policy bank tends to prioritize those incorporated into China's 14th Five-Year Plan (2021-2025) and prepared for construction in the third quarter.

On the ADBC's side, the bank said that its fund has aided over 500 infrastructure projects ranging from urban construction and transport to agriculture and energy.

The fund is estimated to drive a total investment surpassing 1 trillion yuan into these projects, according to the bank.

Together with policy-based assistance, a multitude of commercial banks in China have recently launched tailor-made credit products to support infrastructure projects with more sources of financing.

For instance, the Industrial and Commercial Bank of China, one of the country's four state-owned lenders, announced earlier this month that it had approved loans valued at approximately 37 billion yuan to eight projects.

On the local level, governments are expediting the use of special-purpose bonds to spur investment. Data from the Ministry of Finance showed that in the first seven months of this year, 3.47 trillion yuan worth of such bonds were newly issued nationwide. In particular, those issued for project construction nearly hit the annual quota.

Thanks to these multi-pronged efforts, China's investment in infrastructure expanded by 7.4 percent year on year in the January-July period, with growth pace accelerating for three consecutive months, data from the National Bureau of Statistics showed.

"The robust growth momentum of infrastructure investment can be attributed to China's acceleration in special-purpose bond issuance in the first half of this year," said Luo Guosan, an official with the National Development and Reform Commission.

Looking ahead, Luo said that as the implementation of policy-backed and development-oriented financial instruments picks up pace in the third quarter, the expansion of investment will be further bolstered.

Likewise, a recent research report by the China International Capital Corporation also estimated that total infrastructure investment in 2022 may grow by 10 percent to 12 percent, lifting the nominal GDP growth rate by 1.2 to 1.4 percentage points.

Infrastructure investment will likely give a stronger boost to the economy in September, and its multiplier effect will also increase, the report added.