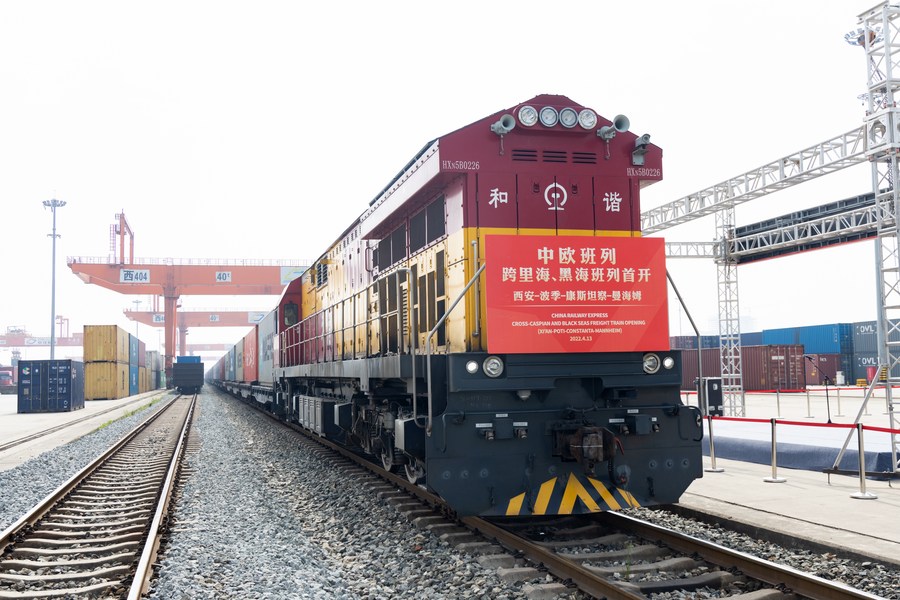 Photo taken on April 13, 2022 shows the freight train heading for Mannheim in Germany is about to depart from the Xi'an international port in Xi'an, northwest China's Shaanxi Province. (Xinhua)

Several countries in Central and Eastern Europe can be reached via this new rail-sea transport route.

The first train on this route, loaded with goods such as sports apparatus, clothes and bedding, departed from the Xi'an international port on Wednesday. The train will pass through Kazakhstan, Azerbaijan, Romania, Hungary, Slovakia and the Czech Republic, and finally reach Mannheim in Germany, covering a total distance of 11,300 km.

The new route covers countries and regions that rarely saw China-Europe freight train services in the past, opening up new markets for domestic and international enterprises, said Yuan Xiaojun, general manager of the Xi'an Free Trade Port Construction and Operation Co., Ltd., adding that the route also provides a new transport option for domestic and international trade and logistics enterprises.

"The new train service has improved transportation efficiency and saved transportation costs for enterprises. Under the current situation, it presents a new opportunity for our company to stabilize exports," said Jia Min, manager of an international logistics company in Xi'an.

At present, Xi'an has 16 main freight train routes to Europe, passing through 45 countries and regions along the Belt and Road.

In the first quarter of the year, Xi'an launched a total of 790 freight trains to Europe.