* The 2022 China International Fair for Trade in Services opened Wednesday in Beijing, showing the country's unwavering commitment to wider opening-up in the services trade sector.

* Over the past decade, the added value of China's service industry has increased by 1.49 times and the country's accumulated services imports have exceeded 4 trillion U.S. dollars.

* Services trade has become an important factor in promoting the sustained and healthy development of the Chinese economy and a booster for the prosperity of the world economy.

BEIJING, Sept. 1 (Xinhua) -- As the 2022 China International Fair for Trade in Services (CIFTIS) kicked off Wednesday in Beijing, the country has shown the world its unwavering commitment to wider opening-up in the services trade sector. 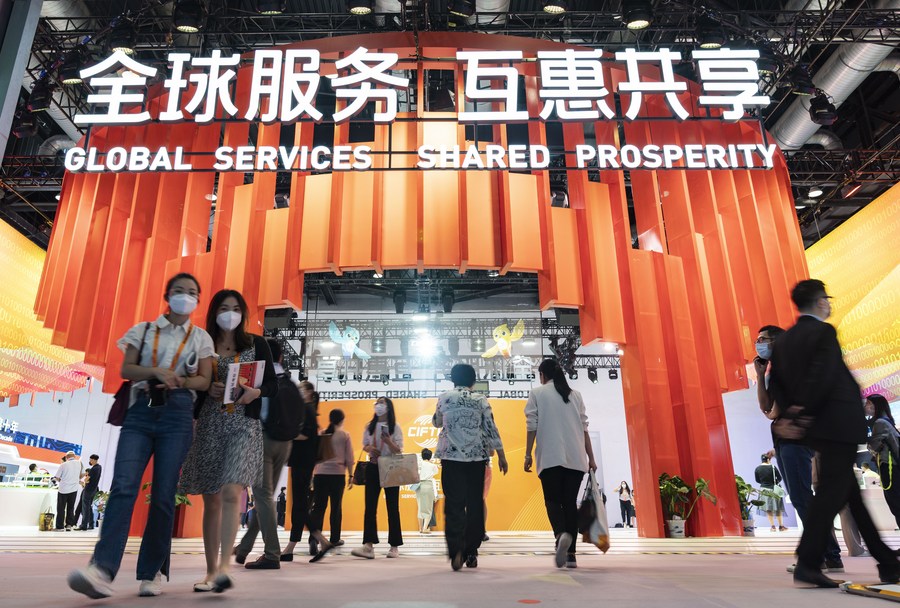 People visit the exhibition during the 2022 China International Fair for Trade in Services (CIFTIS) in Beijing, capital of China, Sept. 1, 2022. (Xinhua/Cai Yang)

While delivering a keynote speech at the Summit of 2022 CIFTIS Wednesday, Chinese Vice Premier Han Zheng called for efforts to promote the healthy and sustainable development of services trade to make a greater contribution to the recovery of the global economy.

China will build a high-standard opening-up system for the services industry and establish a national demonstration zone for services trade innovation, he said.

Han also pledged to support regions, including Beijing, in piloting the cross-border data flows and creating benchmark cities in the digital economy worldwide.

The six-day event this year features greater internationalization, with the participation of over 2,400 companies, including more than 400 Global Fortune 500 companies and industry-leading enterprises. The exhibition area increased by 20 percent from last year to reach 152,000 square meters. 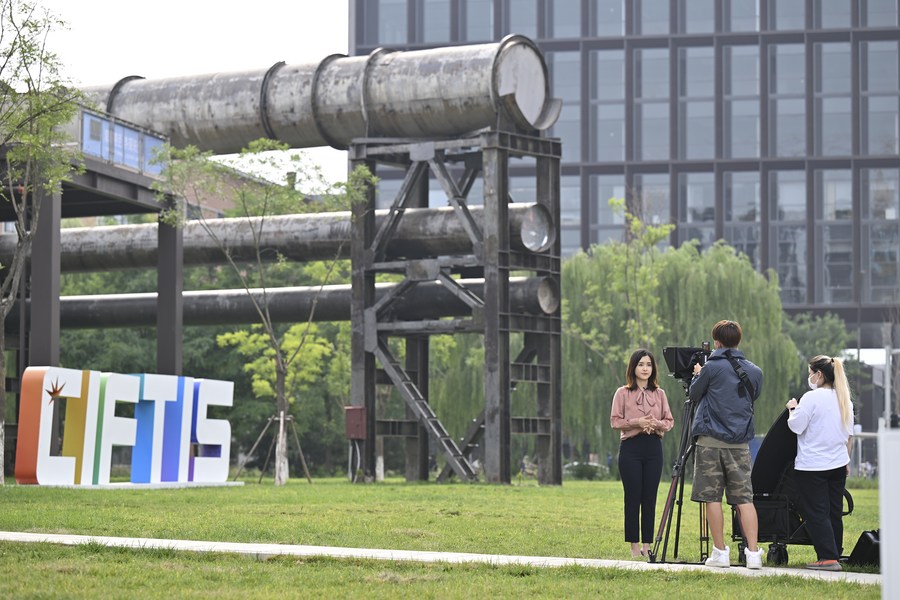 Journalists work during a media preview of the 2022 China International Fair for Trade in Services (CIFTIS) at Shougang Park in Beijing, capital of China, Aug. 29, 2022. (Xinhua/Li Xin)

"More than 100 companies and institutions will release their achievements at this year's CIFTIS, injecting new impetus and vitality into the development of the services trade sector," said Wang Dongtang, an official with the Ministry of Commerce (MOC).

As a vivid epitome of the country's exploration of high-level opening-up, Beijing has been accelerating the development of the city's "two zones" -- the pilot free trade zone and the national comprehensive demonstration zone for expanding opening-up in the services sector.

Over the past two years, the Chinese capital has introduced more than 100 pioneering or breakthrough policies related to the "two zones" and landed over 100 landmark projects and functional platforms.

Model trains of intelligent high-speed railway are seen during the 2022 China International Fair for Trade in Services (CIFTIS) in Beijing, capital of China, Sept. 1, 2022. (Xinhua/Li Xin)

With favorable and innovative policies, the business environment of Beijing Daxing International Airport Economic Zone (Daxing), has continued to improve. The number of registered enterprises in the zone totaled 2,961 by the end of July.

In the economic zone, different shelves in the bonded warehouse of Bo Yue Jin Cheng International Logistics (Beijing) Co., Ltd. are stocked with engines, garments, and other products from overseas.

"We will show our bonded business at the fair to provide service solutions for international customers such as cross-border e-commerce companies," said Gao Shili, head of the logistics company.

As China opens its door wider, many places across the country have taken concrete steps to promote the development of the services trade. China has added four pilot zones for deepening the opening-up of services trade in Tianjin, Shanghai, Hainan and Chongqing.

"More than 90 percent of the 122 specific measures put forward in a pilot plan for comprehensively deepening innovative development of services trade have been implemented," said Shu Jueting, spokesperson for the MOC.

The reform and opening-up have tremendously propelled China's social and economic development, especially in the past decade. The contribution of China's economy to global economic growth has stood at around 30 percent in recent years, making it the largest growth engine for the global economy.

Since 2012, the added value of China's service industry has increased by 1.49 times and the accumulated services imports have exceeded 4 trillion U.S. dollars. Data from MOC showed the country's total imports and exports of services grew 21.4 percent year on year in 2021, exceeding 800 billion U.S. dollars for the first time. 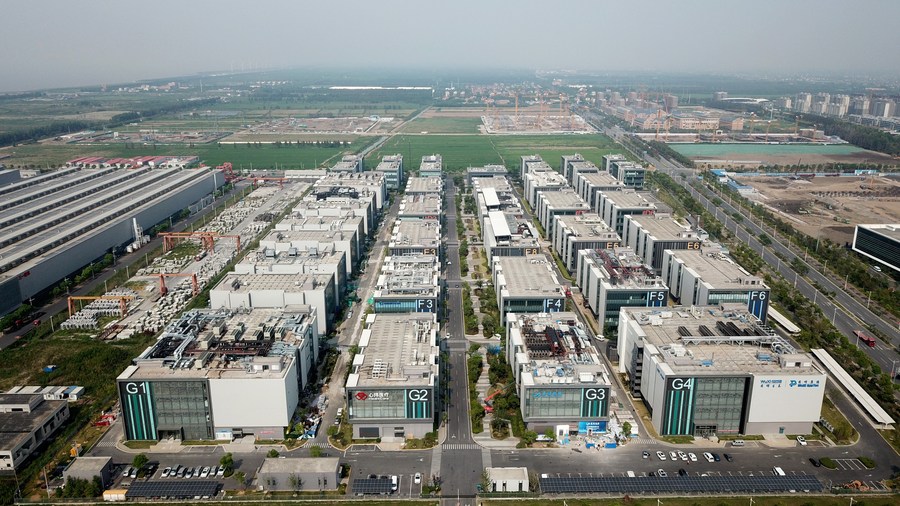 So far, the number of countries and regions that have services trade with China has surpassed 200.

"After years of development, the services trade has become a significant component and growth engine in China's international economic and trade cooperation. It has also made positive contributions in promoting the recovery and development of the global trade in services," said Vice Minister of Commerce Sheng Qiuping. 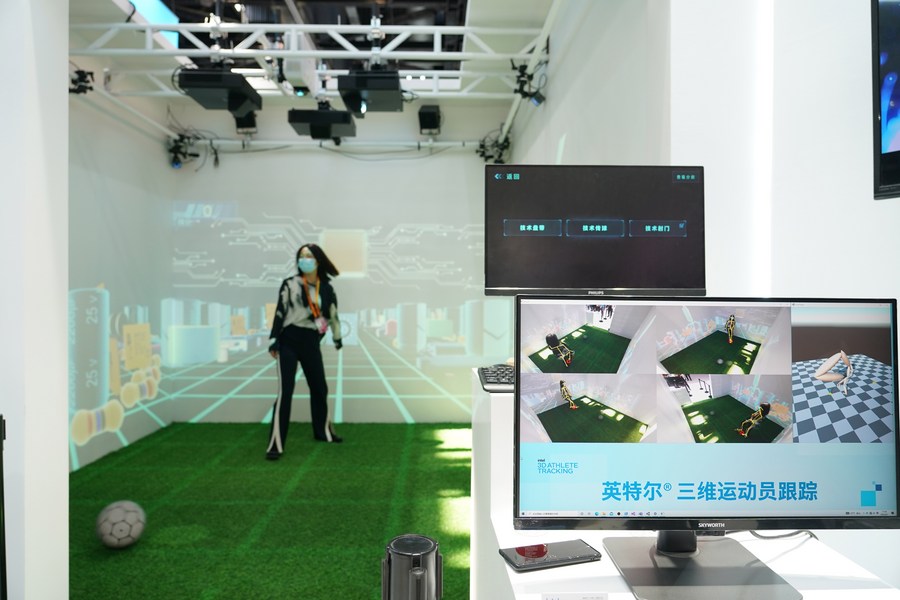 "Services trade has become an important factor in promoting the sustained and healthy development of the Chinese economy and a booster for the prosperity of the world economy," said Li Jun, director with the Institute of International Trade in Services under the MOC.