Photo taken on Sept. 2, 2022 shows a high-speed electric passenger train, customized for the Jakarta-Bandung high-speed railway, being unloaded from a vessel in Tanjung Priok Port in Jakarta, Indonesia.(Xinhua/Xu Qin)

The arrival of the first two units was a milestone for the Jakarta-Bandung high-speed train megaproject, said an Indonesian project staff.

JAKARTA, Sept. 3 (Xinhua) -- With the crane on the cargo ship slowly lifting a train up and then down to a long transportation truck at the Tanjung Priok port, the high-speed trains designed and manufactured in China finally made their debut on Indonesian soil.

One electric passenger train and one inspection train, each of 8-carriage formation, arrived at the port in Jakarta on Thursday evening, after 11 days of sea trip from China's Qingdao port. The unloading of the trains started from Friday afternoon, later they will be transported by road to the Tegalluar depot in Bandung.

At the welcoming ceremony held at the port on Friday, Dwiyana Slamet Riyadi, President Director of PT Kereta Cepat Jakarta Bandung (KCIC), a joint venture between a consortium of Indonesian state-owned enterprises and a consortium of Chinese railroad companies, told Xinhua that the arrival of the first two units was a milestone for the Jakarta-Bandung high-speed train megaproject.

"This arrival is an important achievement. We are very happy about this. And we are getting more and more excited to finish this project on time as targeted. It's also a proof to the public that we and the government are taking this project seriously," the KCIC official said.

Deputy Minister of State-Owned Enterprises Kartika Wijoatmojo said at the ceremony that the trains would not only widen the economic corridor and increase people's mobility between Jakarta and Bandung, but also give the chance for Indonesia to learn a lot more about the advanced technology that China has.

Wijoatmojo said that the whole construction process of the Jakarta-Bandung high-speed railway had met various challenges, especially geological ones. "But this is our first experience, so it will be a lesson for us. We should be grateful because we are now almost at the final phase of the project," he said. 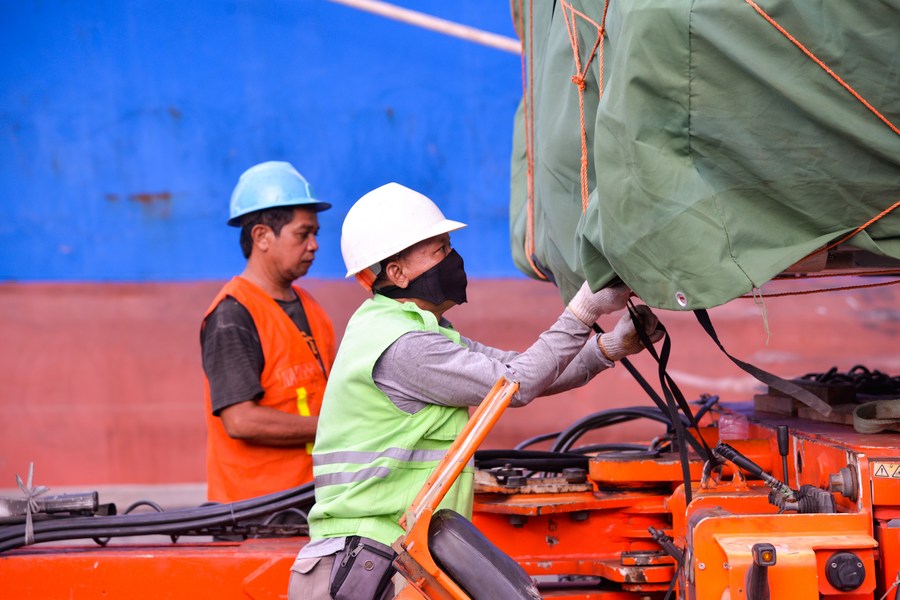 Photo taken on Sept. 2, 2022 shows workers tightening the ropes for the outer wrapping of a high-speed electric passenger train, customized for the Jakarta-Bandung high-speed railway, in Tanjung Priok Port in Jakarta, Indonesia.(Xinhua/Xu Qin)

Covered in green cloth during transportation, the first two trains will only reveal their look after arriving at Bandung.

According to Director for Rolling Stock of Jakarta-Bandung High-Speed Railway Contractor, Liu Shaoyu, the train is featured with the advanced technology of Fuxing bullet train, adaptable to the complex operating environment along the railway, and equipped with earthquake monitoring and early warning systems.

Liu said the carriages are colored with local characteristics. They are in silver and red on the outside with the abstract pattern of Komodo Dragon, a kind of lizard endemic to several Indonesian islands. The main colors of the interior are grey, red and blue, taken from Indonesia's landmark Borobudur Temple, the Indonesian national flag and the sea. Besides, the seats are decorated with propitious clouds, commonly used on Indonesian traditional Batik cloth.

According to the plan, 10 more trains are scheduled to be transported from China to Indonesia in batches by early 2023. 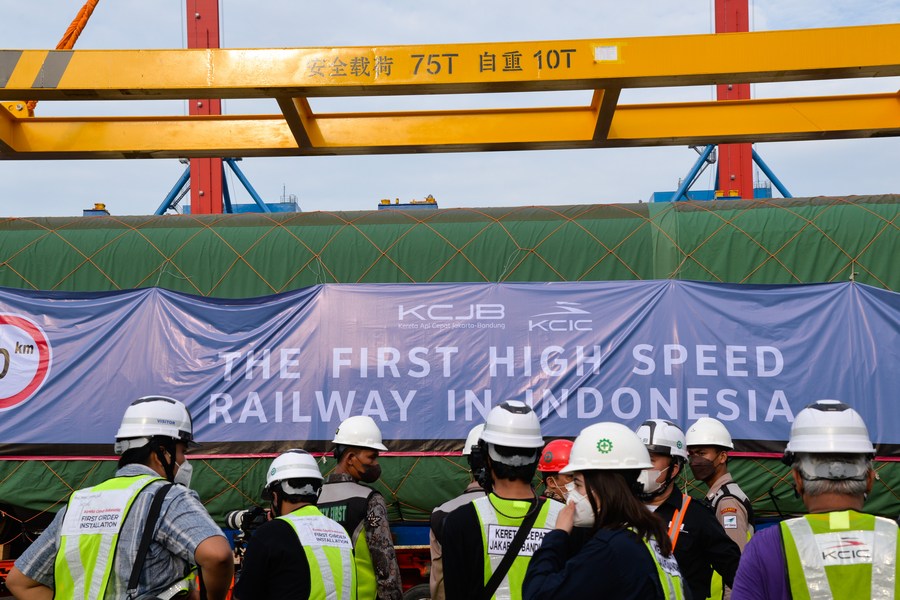 Photo taken on Sept. 2, 2022 shows journalists taking pictures and shooting videos for a high-speed electric passenger train, customized for the Jakarta-Bandung high-speed railway, being unloaded from a vessel in Tanjung Priok Port in Jakarta, Indonesia.(Xinhua/Xu Qin)

Upon hearing the news of the arrival of high-speed trains, Farisa Sunanti, a 29-year-old Bandung resident working as an employee of a private company in Jakarta, said she couldn't wait to take the high-speed train next year.

All this time, she always takes a train from Bandung to Jakarta every Monday at dawn, which takes over three hours. She then returns to Bandung every weekend, also by train, to be with her husband and 3-year-old daughter.

"I read about that the train will reduce the travel time between the two cities to just 45 minutes. That will be really helpful to me. I might be able to go home every day," she said.