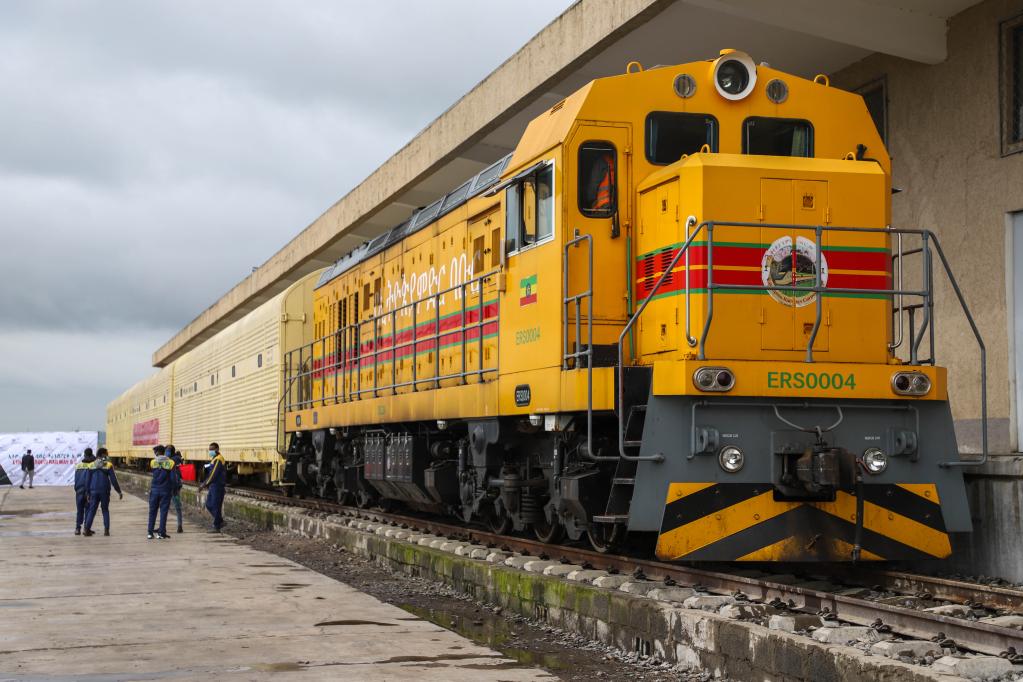 A freight train of Ethiopia-Djibouti railway is seen at the Indode Freight Station on the outskirts of Addis Ababa, Ethiopia, on Aug. 25, 2022. (Xinhua/Michael Tewelde)

Ethiopia and China have a comprehensive strategic partnership, which has been cemented on a principle of win-win and mutual cooperation, a senior Ethiopian government official has said.

ADDIS ABABA, Sept. 3 (Xinhua) -- Ethiopia and China have a comprehensive strategic partnership, which has been cemented on a principle of win-win and mutual cooperation, a senior Ethiopian government official has said.

Ahmed Shide, Ethiopia's Minister of Finance, recently told Xinhua that the two friendly nations have been working to create a "community of shared destiny" amid establishing a strong relationship between their leaders.

"Over the last decade, China and Ethiopia have worked together on many fields wherein China has been availing significant financial support to implement many great projects in Ethiopia like the Addis Ababa-Djibouti Standard Gauge Railway," Shide said.

A locomotive is seen on the outskirts of Addis Ababa, Ethiopia, on Aug. 25, 2022. (Xinhua/Michael Tewelde)

Highlighting that China helped Ethiopia carry out many roads, energy, industrial parks and water supply development projects, the finance minister emphasized that the Addis Ababa-Djibouti Standard Gauge Railway, also known as the Ethiopia-Djibouti railway, has served as a testimony of the early harvest of the Belt and Road Initiative.

"We (Ethiopia and China) have a diversified and strategic cooperation in which China has provided technical support, capacity building in the agricultural sector and exploiting natural resources," Shide said.

According to the minister, China has been investing in existing industrial parks and setting up manufacturing plants both for domestic and international markets as more Chinese investors have been playing a visible role in Ethiopia's economic development.

He expressed his optimism that the partnership between the two countries will grow in volume, diversity and quality, creating a win-win result for both countries and their peoples.

"China has also played a pivotal role in regional integration through undertaking intra-state projects," Shide said, noting that the Addis Ababa and Djibouti railway and Ethiopia-Djibouti water projects are cases in point, with the potential of expansion to serve the whole region.

Commenting on China's rapid economic growth, the minister said "China was able to lift hundreds of millions of its citizens out of poverty and is significantly progressing in terms of the size and complexity of its GDP."