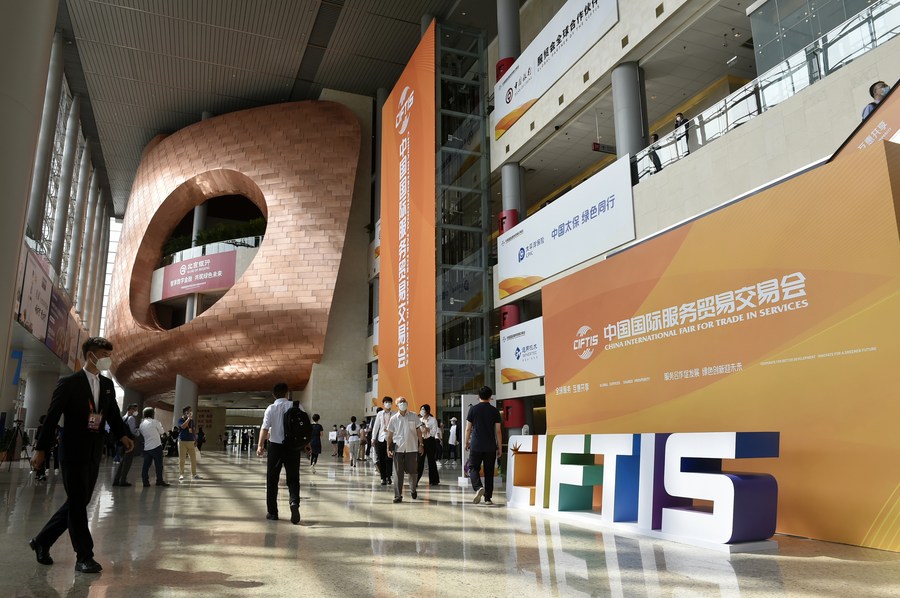 Photo taken on Sept. 3, 2022 shows an interior view of the China National Convention Center during the 2022 China International Fair for Trade in Services (CIFTIS) in Beijing, capital of China. (Xinhua/Lu Peng)

Through digital technology monitoring and big-data analysis, a sleep monitoring platform on display at the fair can achieve early warning of more than 10 diseases like myocardial infarction.

In Shougang Park, one of the exhibition venues for the fair, Peking Opera, an ancient cultural heritage, has become a new fashion trend. A smart map themed on Peking Opera's cultural journey, compiled by the Beijing Overseas Cultural Exchanges Center, has attracted many exhibition visitors.

The map helps sort out more than 100 landmarks, such as ancient Peking Opera theater stages, performance venues, and nearby restaurants in Beijing. Each site has detailed information in the forms of graphics, images, and videos, allowing the audience to experience virtual reality (VR) panoramic views and instant navigation.

According to the United Nations data, the proportion of global digital services in the total service trade had increased from 48 percent in 2011 to 63.6 percent in 2020.

"The COVID-19 pandemic has brought risks and challenges, but business opportunities are everywhere at the CIFTIS," said Bai He, Principle Industry Solution Architect of Amazon Web Services, Greater China Region.

"Our company has participated in the fair for two consecutive years, hoping to show the world the cutting-edge technologies and latest achievements in the fields of medical health, automobile travel, intelligent manufacturing, and so on through the service trade fair," Bai added.

Digital technology is a highlight of this year's service trade fair.

Cloud computing, the Internet of Things, artificial intelligence, blockchain, and other digital technologies have penetrated all aspects of production, circulation, and consumption, enabling service trade to enter the digital "fast lane."

According to the data released by the Ministry of Commerce in August, in the first half of 2022, China's import and export of services notched up 2.89 trillion yuan (about 419 billion U.S. dollars), an increase of 21.6 percent year on year.

Among them, the export of telecommunications, computer, and information services increased by 16.3 percent, becoming an area where the export of knowledge-intensive services grew rapidly.

"We are very optimistic about the prospect of our cooperation with China," said Cao Qian, the government affairs manager with Studio Legale D'Andrea.

Last year, the company set up an office in Beijing, and this year it added offices in Shenzhen and Hong Kong. "We hope to find more cooperation opportunities through the fair, and we can also help the development of China's high-end legal service industry in turn," Cao added.

"The 'digital CIFTIS' has shown us China's action of sharing market opportunities and its economic and trade achievements with the world," said Fukaishi Akihiro, president of Epson (China) Co., Ltd., during the fair.

This year's CIFTIS has attracted more than 400 Global Fortune 500 companies and industry-leading enterprises to attend the fair offline.