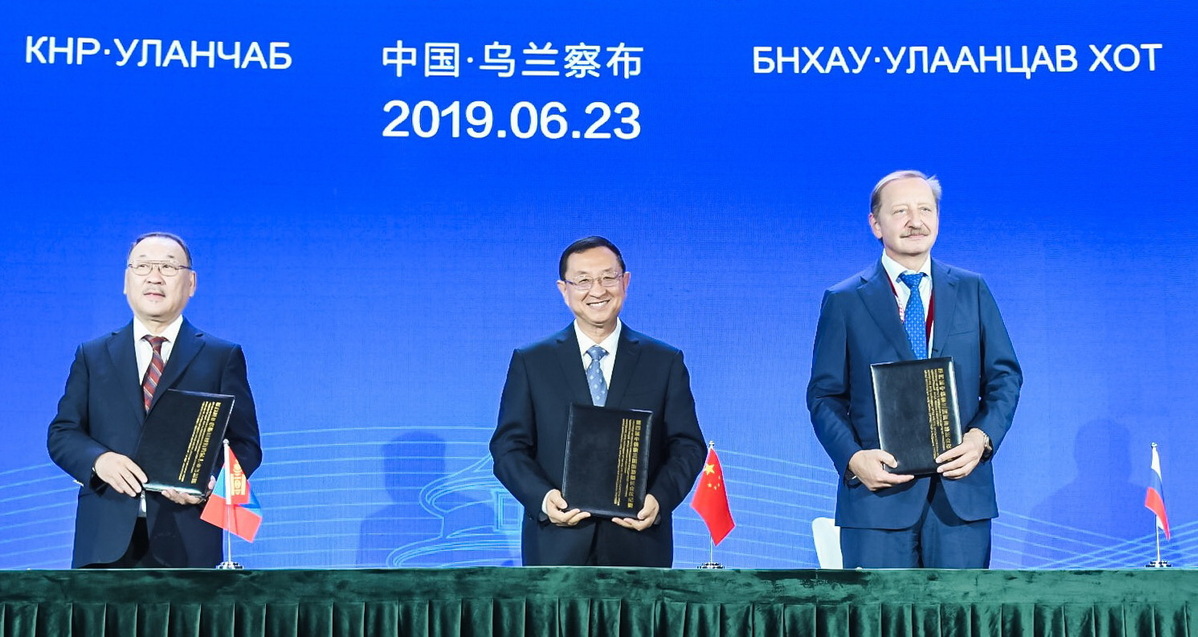 Copies of the Minutes of the Fourth Tourism Ministerial Conference of China, Russia and Mongolia were signed by Ts. Tsengel of Mongolia (left), Luo Shugang of China (center) and Alexey Konyushkov of Russia in Ulaanqab, Inner Mongolia autonomous region, on Sunday. (China Daily)

With the aim of deepening trilateral cooperation in the tourism sector, the Fourth Tourism Ministerial Conference of China, Russia and Mongolia was held on Sunday in Ulaanqab, a city in the Inner Mongolia autonomous region.

Attending the event were Luo Shugang, China's minister of culture and tourism; Alexey Konyushkov, deputy head of the Federal Agency for Tourism of the Russian Federation; and Ts. Tsengel, state secretary at the Ministry of Nature, Environment and Tourism of Mongolia. They were joined by hundreds of representatives from the tourism, culture, academic and media sectors from the three countries.

Luo, who delivered the keynote speech, pointed out that tourism cooperation is such a vital part of the trilateral relationship that it plays an irreplaceable role in deepening friendship and understanding among the people of China, Russia and Mongolia.

According to Luo, the most noteworthy development in tourism since 2016, when the first ministerial conference was held, is that the number of mutual visits among the three countries is steadily rising.

In 2018, over 2.4 million Russian tourists visited China, a 3 percent year-on-year increase. The number of visitors from Mongolia to China rose 2.8 percent to over 1.9 million; the number of Chinese visitors visiting Russia hit 2 million, an increase of 21 percent from the previous year; and nearly 200,000 Chinese visitors were received by Mongolia, a 19 percent growth.

The statistics show the growing appeal of Russia and Mongolia as tourist destinations for Chinese travelers. They are also an indicator that tourism plays a pivotal role in trilateral friendship, Luo said.

Luo proposed five suggestions for future cooperation: deepening the integration of culture and tourism and crafting quality cross-border travel products; using tourism as an engine to boost the intensive development of other related industries such as transportation, catering and entertainment; upgrading travel services to make them convenient and more comfortable for tourists; strengthening surveillance of the tourism market to build a safe and civilized environment; and enhancing the reputation of the "Tea Road" as a travel brand.

Konyushkov said that Russia, China and Mongolia are important partners in the field of tourism. Time-honored friendships and geographic proximity have created a favorable environment for the three countries to develop crossborder tourism.

He mentioned that the largest number of inbound visitors to Russia comes from China, and the number of Russian visitors to China is also growing. The tourism ministerial conference serves as an effective platform to facilitate trilateral tourism cooperation, Konyushkov said.

The Minutes of the Fourth Tourism Ministerial Conference of China, Russia and Mongolia were signed at the event, establishing another milestone in the history of the trilateral partnership in crossborder tourism.

Initiated by China, the first ministerial conference was held in Hohhot, the capital city of Inner Mongolia. The second was held in Russia's Buryatia and the third was in Mongolia's Ulaanbaatar last year.

The Tea Road Cultural and Tourism Expo was also unveiled on Sunday as part of the event.

Covering a total length of over 13,000 kilometers, the Tea Road served as an important international commercial road in the history of Eurasia.

Since the establishment of the Tea Road International Tourism Alliance in 2016, a wide range of related travel products have been jointly developed by China, Russia and Mongolia, including an international self-driving tour, a special train, a summer camp and more, making the cross-border tourism scene diversified and vibrant.