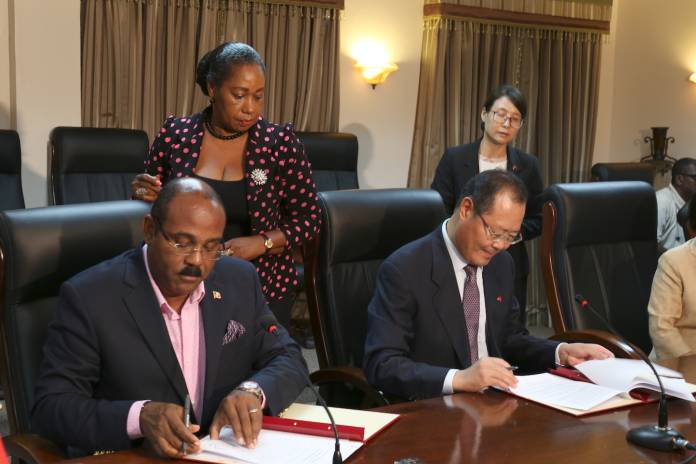 Prime minister of Antigua and Barbuda, Gaston Browne, on Monday signed a memorandum of understanding with China on cooperation within the framework of the Silk Road Economic Belt and Silk Road Initiative.

The MOU between the two countries is of an historic nature, as Antigua and Barbuda is the first country in the OECS to benefit from the initiative.

Prime Minister Gaston Browne, and wife and headed the table for the ceremonial signing and exchange of remarks.

Browne, during his address at the signing ceremony, which included China’s Ambassador Wang Xianmin and Ambassador Brian Stuart-Young, stated that “there have been many agreements signed between the People’s Republic of China and Antigua and Barbuda in the Office of the Prime Minister over the years, but I believe today we enter a new phase in our relationship with the People’s Republic of China.”

The Belt and Road Initiative is a collective agreement with the aim of promoting the exchanges of goods, technology, capital and personnel through mutual connectivity and learning. The Initiative also includes the coordinated development and common progress in the economy, society, environment, and cultural aspects; encouraging dialogues and integration among different civilizations as well as building a community of a shared future for mankind.

Browne highlighted the enormous role played by China in the nation’s development since independence, outlining that China is Antigua and Barbuda’s primary development partner.

Antigua and Barbuda, being the first OECS country, and the second country in the Caribbean (Trinidad and Tobago being the first having signed last month) to join this initiative, now joins 80 other developing countries around the world.

“China’s dedication to the strengthening of diplomatic, economic and friendly bilateral relations with Antigua and Barbuda is demonstrated through their commitment of support in the interest of micro states. China has a special affinity for developing countries, and has lent a hand of friendship and cooperation to Antigua and Barbuda in areas that critical to our development,” Browne stated.

Browne went on to thank the government of China and assured them that Antigua and Barbuda will cooperate with China at the international level, building consensus on issues that require international stance to bring about meaningful change.

The prime minister said: “The Belt and Road Initiative, boosted by trillions of investment in infrastructure, addresses an infrastructure gap in world trade and economic relations and will most certainly accelerate economic growth across the Asia- Pacific Area and Central Eastern Europe.”

The MOU which the prime minister and Wang signed, will promote bilateral cooperation in a number of areas, key among them being building infrastructure connectivity such as roads, bridges, civil aviation, ports, energy and telecommunications.

“This opening up to unimpeded trade and investment flows also envisages the expansion of the use of local currency in investment and trade and the encouragement to the industry to build industrial parks and special economic and trade zones. We will not let this unique opportunity slip from our grasp.” Browne stated. “I pledge my government’s full collaboration with China in the implementation of this ground breaking initiative.”

Wang also gave brief remarks at the event and began by expressing his gratitude to Browne for his support of the Road and Belt initiative and his contribution to the strong bilateral relationship both countries share.

The Chinese ambassador stated: “Trade under this initiative has risen to US$5 trillion and stock investment over US$70 billion. Seventy-five economic cooperation zones have been built creating 200,000 jobs in the partner countries.”

The ambassador praised the leadership of Antigua and Barbuda “for their ability to make visionary decisions at the historical junctions.”

He ended by reaffirming China’s willingness to work with the government of Antigua and Barbuda to make common progress and continued strong diplomatic and friendly relations.