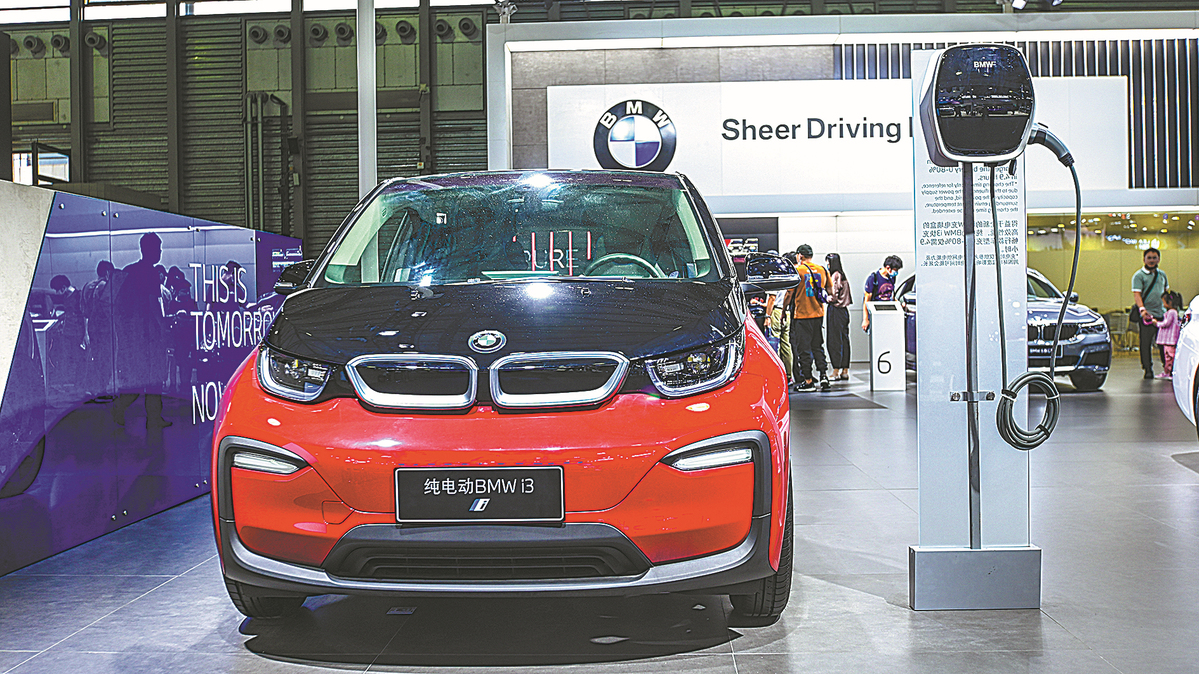 A BMW i3 car on display during an auto expo in Shanghai. [GAO YUWEN/FOR CHINA DAILY]

German automaker BMW voiced its firm confidence over long-term development prospects of the Chinese market, following the opening of a new plant in Shenyang, capital city of Northeast China's Liaoning province, on Thursday.

BMW Brilliance Automotive named the new plant Lydia, which marks an upgrade for the large-scale production base in the region.

This is BMW's third automobile plant in China. It is designed to mainly produce battery-powered electric cars, including the all-new BMW i3, a mid-size sport sedan that BMW designs exclusively for the Chinese market.

Construction of the Lydia plant started in 2020. BMW invested 15 billion yuan ($2.23 billion), its largest investment in China in the past 19 years.

The plant is expected to increase the annual output of BMW Brilliance's Shenyang production base to 830,000 vehicles from 700,000 units in 2021.

"The new plant can be transformed to fully produce electric vehicles on its flexible manufacturing lines, according to market demand," said Jochen Goller, president and CEO of BMW Group Region China.

"Together with the newly upgraded Dadong plant, Lydia will play an important role in accelerating China's electrification of its auto industry," he said.

Since 2010, BMW Brilliance has invested around 83 billion yuan in Shenyang to build a production system integrating research and development, procurement, and vehicle production, making Shenyang the largest production base of BMW in the world.

"The years of in-depth cooperation between Shenyang and BMW have made us deeply realize that the best relationship between a city and an enterprise is common growth and creating the future together," said Wang Xinwei, Party secretary of Shenyang.

"We expect that BMW will accelerate the electrification of the auto industry and produce more excellent products with cutting-edge technologies and exquisite workmanship."

In 2021, over 3.5 million new energy vehicles were sold in China, the largest number in the world, according to the China Association of Automobile Manufacturers.

Local governments also promoted policies to support purchases of NEVs. The State Council executive meeting on Wednesday noted that the extension of the tax exemption policy for NEV purchases, which is to expire by the end of the year, will be explored in light of current conditions. Implementation of these policies is expected to increase automobile and related sales by about 200 billion yuan this year.

Industry insiders said the Lydia plant reflects BMW's efforts to catch up with the booming EV market in China, which is now dominated by Tesla and Chinese automaker BYD.

"The BMW project is a successful example of foreign-funded enterprises in China," said Li Lecheng, governor of Liaoning. "This year marks the 50th anniversary of the establishment of diplomatic relations between China and Germany. We hope that BMW Group adheres to the localization development strategy, integrates the company into Liaoning's development, deepens cooperation with Liaoning and makes positive contributions to the healthy and stable development of China-Germany relations."

Zhang Bihao contributed to this story.