* Noting Widodo is the first head of state China hosts after the Beijing Olympic Winter Games, Xi said this speaks volumes about the strong commitment of the two sides to growing bilateral ties.

* "Building a China-Indonesia community with a shared future is the common aspiration and expectation of the two peoples," Xi said.

* China fully supports Indonesia in hosting the G20 Bali Summit, and will increase coordination and cooperation with Indonesia for a full success of the Summit, Xi said.

BEIJING, July 26 (Xinhua) -- Chinese President Xi Jinping on Tuesday held talks with visiting Indonesian President Joko Widodo in Beijing. The two presidents had a comprehensive and in-depth exchange of views and reached a series of important common understandings on China-Indonesia relations and on international and regional issues of mutual interest.

Expressing his delight that the two sides have decided on the overall direction of building a China-Indonesia community with a shared future, Xi said China will work with Indonesia to cement strategic mutual trust and firmly support each other in defending sovereignty, security and development interests, in exploring development paths in line with national conditions, and in growing the economy and bettering people's lives. 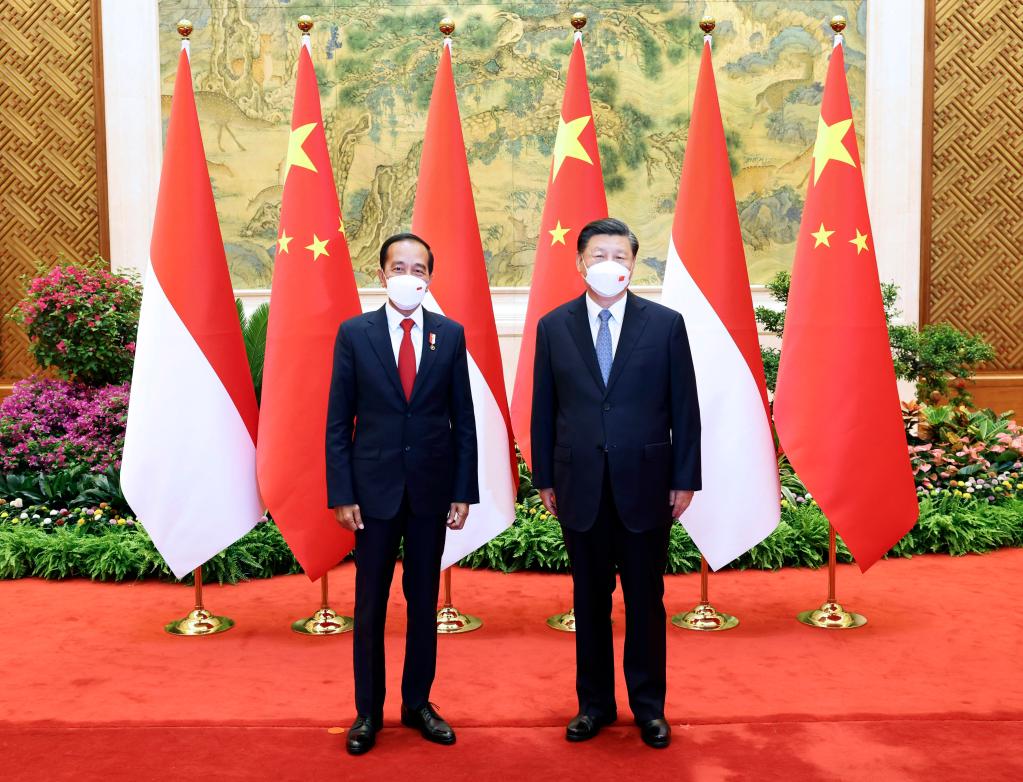 Noting Widodo is the first head of state China hosts after the Beijing Olympic Winter Games, Xi said this speaks volumes about the strong commitment of the two sides to growing bilateral ties.

The two sides have acted proactively and with a strong sense of responsibility to maintain regional peace and stability and promote international unity and cooperation, Xi said, adding the two countries have thus set an example of major developing countries seeking strength through unity and win-win cooperation.

"Facts have proven that a sound China-Indonesia relationship not only serves the shared long-term interests of the two countries, but also has positive, far-reaching impacts regionally and globally," said Xi.

Currently, the Chinese people are working toward the second centenary goal of building a great modern socialist country in all respects, while the Indonesian people are actively pursuing Vision 2045, Xi said, expressing his readiness to work with President Widodo and continue steering the steady and sustained growth of bilateral relations from a strategic height and a long-term perspective, in order to bring greater benefits to the two peoples and make greater contribution to peace and stability in the region and beyond.

For his part, Widodo said Indonesia and China are comprehensive strategic partners with an important goal of jointly building a community with a shared future, adding their cooperation is mutually beneficial, not only serving the two peoples well but also contributing significantly to peace and development in the region and beyond.

Noting the sound cooperation between Indonesia and China has demonstrated the strategic nature of the bilateral relations, Widodo said Indonesia will work with China to keep deepening comprehensive strategic partnership and make still greater contribution to regional peace and global development.

CHINA-INDONESIA COMMUNITY WITH A SHARED FUTURE

Xi noted that China and Indonesia are at similar development stages, have entwined interests, follow similar philosophies and development paths, and share a closely connected future. "Building a China-Indonesia community with a shared future is the common aspiration and expectation of the two peoples," Xi said.

The two sides need to further deepen high-quality Belt and Road cooperation for more fruitful outcomes, strive for completing the Jakarta-Bandung high-speed railway on schedule and to high standards, and ensure good implementation of such major cooperation projects as the Regional Comprehensive Economic Corridor and the "Two Countries, Twin Parks," Xi said.

Xi said China will continue to fully support Indonesia in building a regional vaccine production hub, and will step up public health cooperation with Indonesia.

Xi added China is willing to import more commodities and quality agro- and by-products from Indonesia, take an active part in the development of Indonesia's new capital and the North Kalimantan Industrial Park, expand cooperation in development financing, and cultivate new growth drivers in digital economy and green development, among other areas.

Widodo said China is welcome to take an active part in the development of Indonesia's new capital and the North Kalimantan Green Industrial Park, and seek greater strategic synergy between the Global Maritime Fulcrum and the Belt and Road Initiative, adding Indonesia is ready to work with China to ensure that the Jakarta-Bandung high-speed railway is completed and put into operation on schedule and becomes another milestone in bilateral friendship. 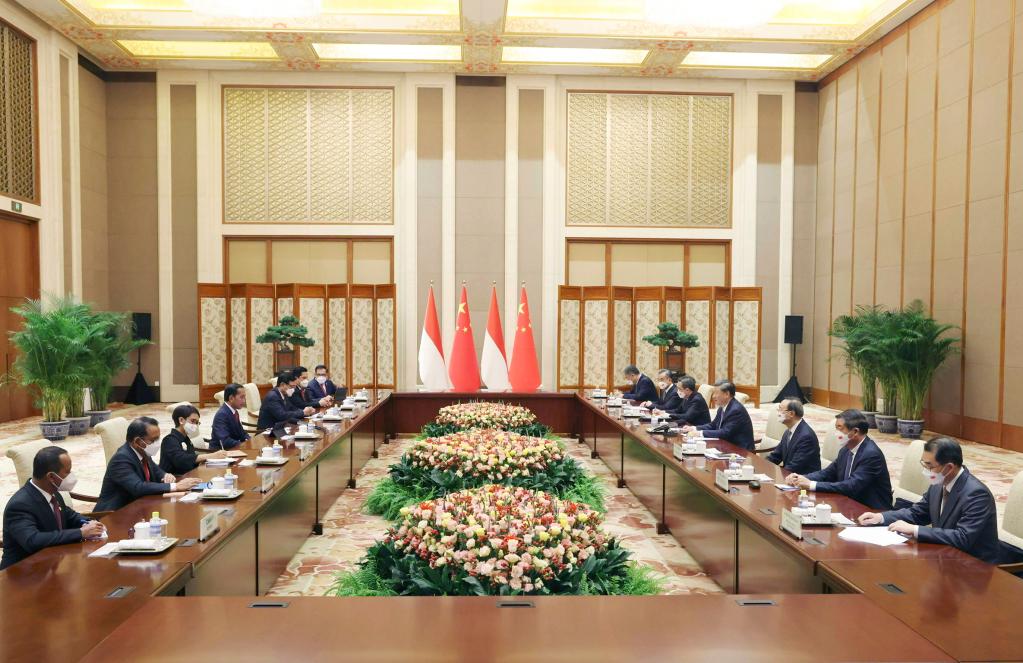 STAND TOGETHER IN SOLIDARITY

Facing changes in the world that are unfolding in ways like never before, Xi said China and Indonesia need to stand together in solidarity, fulfill the responsibilities of major developing countries, follow true multilateralism, uphold open regionalism, and contribute Oriental wisdom and Asia's input to the development of global governance.

China fully supports Indonesia in hosting the G20 Bali Summit, and will increase coordination and cooperation with Indonesia for a full success of the Summit, Xi said. China will give full support to Indonesia's ASEAN chairmanship next year, and will enhance solidarity and coordination with ASEAN, with a focus on the five proposals on building our home together, to further unleash new dynamism of the China-ASEAN comprehensive strategic partnership, Xi said.

Noting that China welcomes Indonesia's continued active participation in "BRICS Plus" cooperation, Xi said China appreciates Indonesia's support for and commitment to the Global Development Initiative and the Global Security Initiative, and is ready for closer communication and cooperation with Indonesia in this regard.

Widodo thanked China for supporting Indonesia's G20 presidency, adding that Indonesia will maintain close coordination with China for the success of the G20 Bali Summit. As the ASEAN rotating chair next year, Indonesia is ready to make active efforts for the growth of ASEAN-China relations, Widodo added.

The two presidents also exchanged views on issues including the Ukraine crisis. They shared the view that the international community should create conditions for peace talks, play a constructive role in deescalating the situation in Ukraine and stabilizing the global economic order, and work together to maintain the hard-won peace and stability in the region.

The two sides issued a Joint Press Statement on the Bilateral Meeting between President of the People's Republic of China and President of the Republic of Indonesia. They also signed an MOU on jointly promoting cooperation between the Silk Road Economic Belt and the 21st Century Maritime Silk Road Initiative and the Global Maritime Fulcrum, and other cooperation documents covering such areas as vaccine, green development, cyber security and ocean.