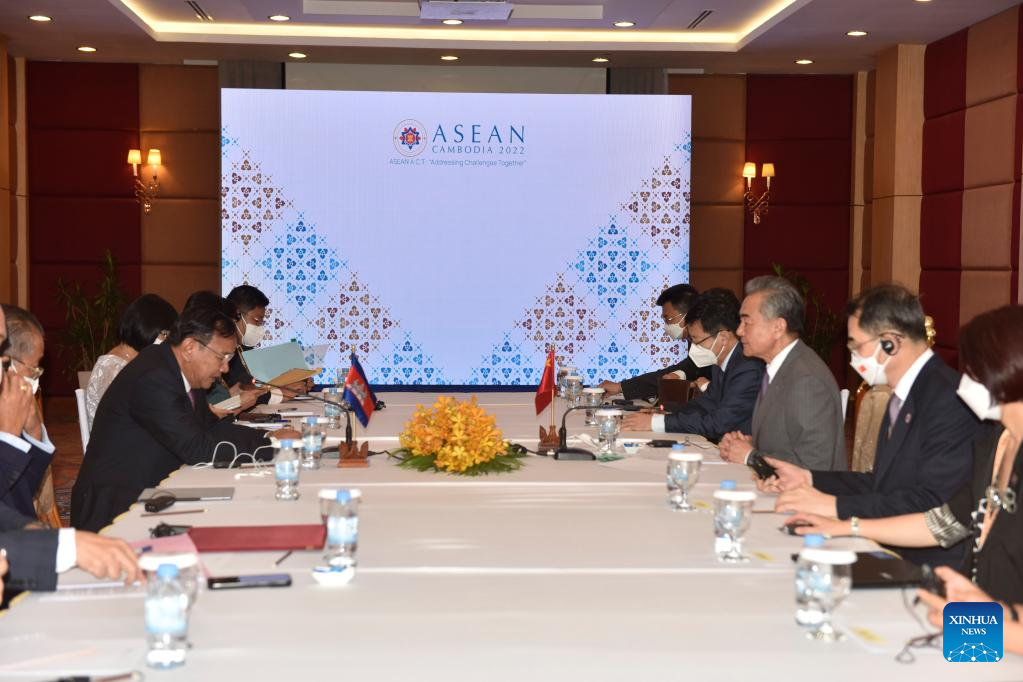 During talks with visiting Chinese State Councilor and Foreign Minister Wang Yi here on Wednesday, Cambodian Deputy Prime Minister and Foreign Minister Prak Sokhonn said the United States has recently violated China's sovereignty, reneged on its own promise and heightened the tension across the Taiwan Strait, which exposed Washington's failure to match its words with actions as well as its hegemonic nature.

Taiwan is an inalienable part of China's territory, he said. Cambodia firmly adheres to the one-China policy and backs China's justified position on its internal affairs including Taiwan, Xinjiang and Tibet.

Cambodia supports China in safeguarding its legitimate rights and interests, and in responding resolutely to U.S. provocative actions, Sokhonn said.

He noted that the Cambodian and Chinese leaders have maintained close communication, which has injected great vitality into bilateral relations.

Sokhonn expressed gratitude to China for its long-time firm support for Cambodia in pursuing a development path suited to its own national condition, and in facilitating economic construction and improving people's livelihood.

Cambodia is ready to cement its "ironclad" friendship with China and push for ever more achievements from their comprehensive strategic cooperative partnership, he added.

For his part, Wang appreciated Cambodia's upholding of justice, stressing that the rights and wrongs concerning the current intense situation across the Taiwan Strait is crystal clear that it is the U.S. side that infringed on China's sovereignty and territorial integrity, and it is also the U.S. side that sabotaged the stability across the Taiwan Strait.

Many countries have made clear their adherence to the one-China principle and their support for China's legitimate position, Wang said, adding that it is the inherent requirement of the China-ASEAN comprehensive strategic partnership to support each other in safeguarding their core interests.

China is willing to work with ASEAN (the Association of Southeast Asian Nations) countries to safeguard the most basic norm of international relations -- non-interference in internal affairs of sovereign states -- to defend international fairness and justice, and to protect the hard-won regional peace, stability and development, he said.

Facing the turbulent international situation, it is of great significance for China and Cambodia to strengthen solidarity and coordination, Wang said, noting that the more complicated the outside environment has become, the more resolute the two countries must be to do their own business well and to develop China-Cambodia friendship.

He said China supports Cambodia in safeguarding its sovereign independence and national dignity, and is willing to take as an opportunity the new action plan on building the China-Cambodia community with a shared future and the 65th anniversary of the establishment of diplomatic relations next year, to carry forward the traditional friendship forged by the older generation of leaders of the two countries, and promote the building of the community with a shared future, so as to create a new future for bilateral friendship.

The two sides exchanged views on strengthening coordination over regional affairs. Wang said China supports Cambodia in fulfilling its responsibility as the rotating ASEAN chair for 2022 and holding meetings of foreign ministers on East Asia cooperation.

China is ready to join hands with the ASEAN nations, including Cambodia, to better implement the consensus reached at the ASEAN-China special summit commemorating the 30th anniversary of ASEAN-China dialogue relations in November last year and work together to reach an agreement on the action plan on the ASEAN-China comprehensive strategic partnership as soon as possible, so as to add fresh strong impetus to the two sides' cooperation in various fields, Wang said.

Wang and Sokhonn also exchanged views on the Myanmar issue.