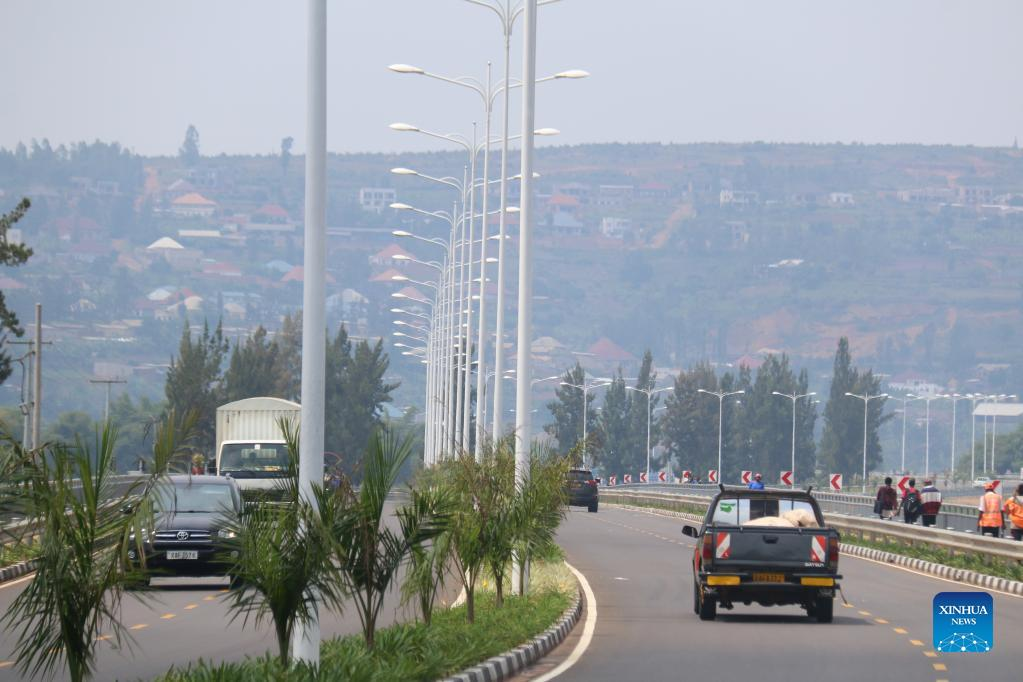 Traffics are seen on a road upgraded by a Chinese company in Kigali, Rwanda, Sept. 16, 2022. A road upgrading project in Rwanda contracted to China Road and Bridge Corporation (CRBC) has helped ease traffic flow and advance seamless trade along the Kigali-Bugesera district, eastern Rwanda.  (Photo by Huang Wanqing/Xinhua)

The upgraded road, stretching 13.8 km, starts from the Sonatube roundabout in Kigali, the capital of Rwanda, through the Gahanga sector to the Akagera bridge in the Bugesera district. It forms part of an avenue leading to Rwanda's new Bugesera International Airport located 40 km south of the Kigali International Airport.

The CRBC, which started the upgraded project in 2019 and took more than three years to finish it due to factors including COVID-19, has won accolades from locals for upgrading the road to ease traffic flow and movement of goods and people as well as stimulate economic growth along the Kigali-Bugesera highway.

"Before the upgrade of this road, we suffered heavy traffic most especially at Kicukiro town center because the road was narrow with only two-way two-lane. This road is mostly used by people traveling from Kigali to Nyamata town in Bugesera district and a lot of people use this road daily," said Emmanuel Habineza, a trader who uses the road, in an interview with Xinhua.

He said before the road upgrade it took him 45 minutes to transport his produce from Gahanga town to Kicukiro town but now after the road upgrade, it only takes 20 minutes. "The road is of a high standard and looks beautiful. This makes our movement quick, which saves our time and boosts trade," said Habineza.

Habineza commended the Chinese company for supporting the upgrade of the road which, he says, has allowed the locals to increase their trade and ease traffic flow along the road.

Speaking to Xinhua in an interview, Tian Chong, the project manager, said that before the upgrade of the road, it was only a two-way two-lane urban road and was of a low standard.

"The contract period is 24 months. Due to the impact of the pandemic and the demolition of local pipelines, the progress has been delayed, and the construction period has been extended by 15 and a half months," said Tian. "We upgraded the road to two-way four-lane and in some sections along the road, we have reached two-way six-lane. This has eased the movement of traffic along this road."

"We also constructed a flyover in Kicukiro center along the road. Before the construction of the flyover, there were heavy traffic jams on a daily basis which interrupted the movement of goods and people on this road. Now, there is no traffic jam anymore," he said.

The overall traffic flow has been greatly improved along the road to Bugesera district, said Tian.

"We have always adopted a localized management model, and most of the skilled and common types of work are hired local workers. There are still more than 500 local employees in our project. Since the start of construction, the project has trained thousands of technical workers," he explained.

The road upgrade is designed and constructed according to Chinese standards as well as in accordance with the first-class highway standard of China, said Tian.

According to him, the road features a central green belt, and vegetation with local characteristics, including palm trees and sunflowers.

"With the construction and completion of the project, many shops, residences and some office buildings have been built along the line, which has played a certain role in promoting the local economy along the line," said Tian.

"I was lucky to be offered a job as a secretary for the road project. I started working with China Road and Bridge Corporation in 2016 and the payment is good. I am able to pay school fees for my children and afford a good standard of living in Kigali," Liliane Nikuze, one of the employees of the road project, told Xinhua.

She added that CRBC is a good company that has offered employment opportunities to many Rwandans including her and this has greatly improved their lives and incomes.