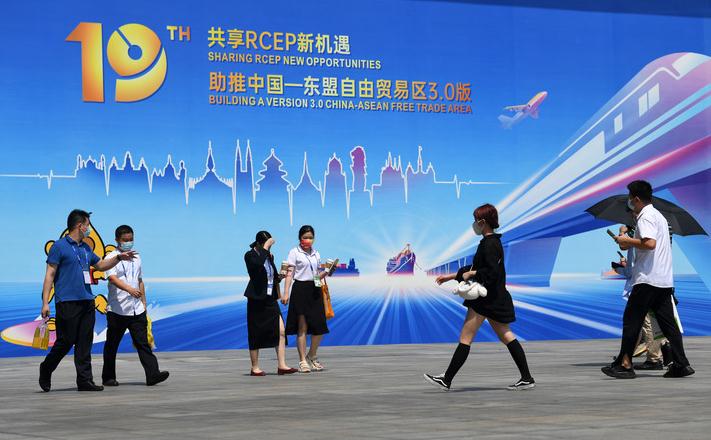 The 19th China-ASEAN Expo concluded in Nanning, the capital of South China's Guangxi Zhuang Autonomous Region, on Monday. With the theme of "Sharing RCEP New Opportunities, Building a Version 3.0 China-ASEAN Free Trade Area", this year's expo was deemed as a strong booster for facilitating multi-field cooperation and building a closer China-ASEAN community with shared future for mankind.

Statistics showed that the offline event has attracted 1,653 exhibitors and the online expo has attracted the participation of more than 2,000 enterprises.

In addition, the demand for booths and the scale of exhibitions of Laos, Myanmar, Singapore and the Philippines also increase significantly.

This year's expo covers a total area of 102,000 square meters, with a planned number of booths of about 5,400. The exhibition area of foreign exhibitors accounts for about 30 percent of the total, which has recovered to the level before the pandemic.

With the implementation of the Regional Comprehensive Economic Partnership (RCEP) and the upcoming launch of the construction of Version 3.0 China-ASEAN Free Trade Area, the event made an active response to the new situations and opportunities, and unleashed new driving forces for regional investment cooperation in the context of the implementation of RCEP.

This year marks the 30th anniversary of the establishment of diplomatic relations between China and the Republic of Korea (ROK), and is also the "Year of Cultural Exchange between China and the ROK". As one of the RCEP member countries, the ROK has once again served as the special cooperation partner of the expo after 2015.

At this year's event, the ROK set up a national pavilion to display its national image and featured products, held the "2022 ROK Enterprises' Tour to Guangxi" for the first time, and host special cooperation partner activities to explore new business opportunities.

In addition, this year's expo continued to hold the "2022 Japanese Enterprises' Tour to Guangxi", which was attended by more than 30 multinational corporations such as Mitsubishi Corporation, Sumitomo Mitsui Banking Corporation and Japan Airlines.

Liu Zhenglei, chairman of the China Illuminating Engineering Society, said that with the support of the expo, they have organized more than 60 exhibitors to showcase new technologies, products and concepts of lighting, and held academic forums, technical salons, and matchmaking meetings to show China's lighting technology and promote China's lighting technology, products, standards and industry to go global.

Wu Zhengping, head of the trade development bureau of China's Ministry of Commerce, introduced that the event also provides post-exhibition sales services for overseas exhibits for the first time.

Wu also pointed out that exhibits that have not been completely sold out during the exhibition can be retained at the China-ASEAN Featured Commodities Collection Center for free for sale and regular display. In addition, precise matchmaking services are provided for more than 3,500 pairs of domestic and foreign merchants during the exhibition.

Implementing RCEP in a high-quality way, benefiting from regional integration, and catalyzing prosperity and development are the common aspirations of the business communities of all member states.

To this end, this year's expo specially held various activities and exhibitions related to RCEP to build a high-level cooperation platform for the integrated development of RCEP regional economy.

The ASEAN & RCEP boutique exhibition area that was set up for the first time showcased the overall image of ASEAN countries, and launched a large number of key cooperation projects for RCEP member states to promote further commodity trade and investment cooperation and service trade exchanges.

This year, the import exhibits are mainly featured food and cosmetics from ASEAN countries, and the quantity is more than doubled relative to last year, said Yang Kai, an official with Nanning Customs, adding that the exhibits of all RCEP member states were gathered together at the expo for the first time, manifesting the significantly increased international attraction and influence of China-ASEAN Expo.

Statistics show that the previous sessions of China-ASEAN Expo attracted a total of 1,015,000 merchants worldwide, effectively empowering the construction of China-ASEAN Free Trade Area and the Belt and Road cooperation.

From January to July this year, the trade volume between China and ASEAN countries reached 544.9 billion U.S. dollars, up by 13.1 percent year on year, accounting for up to 15 percent of China's total volume of foreign trade. China has maintained ASEAN's largest trading partner for 13 consecutive years.

Promoting the construction of the China-ASEAN Free Trade Area is the original aspiration and mission of the expo, said Wei Zhaohui, the secretary-general of the expo's secretariat.

According to Wei, this year's expo propelled the construction of Version 3.0 China-ASEAN Free Trade Area from four aspects: promoting high-level leaders to reach new consensus, focusing on new hot spots about the construction of the free trade area, striving for new breakthroughs in economic and trade results, and opening up new cooperation in more fields..

It is learned that about 267 domestic and international deals have been signed during the event, with a total investment of 413 billion yuan, up 37 percent compared to last year. The total investment amount of the signed deals reached a record high.

Since the first China-ASEAN Expo was held in 2004, the event has actively built a platform for ASEAN enterprises to enter the Chinese market.

At the same time, domestic enterprises also draw on the event to inject strong impetus into the development of regional in-depth integration.