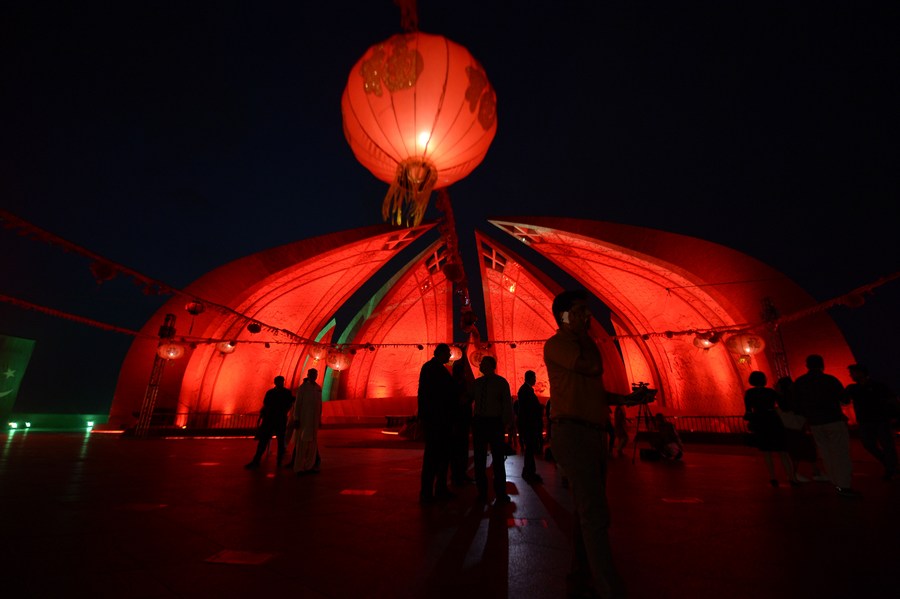 Photo taken on Oct. 1, 2022 shows people visit the Pakistan Monument during an event marking the 73rd anniversary of the founding of the People's Republic of China, in Islamabad, capital of Pakistan.(Xinhua/Ahmad Kamal)

"China offers a promise of hope to the developing world beset by multiple crises relating to climate, finance, food and energy. The Chinese template of inter-state relations prioritizes cooperation over confrontation, a governing principle in formation of a community of common destiny," Pakistani Prime Minister Shahbaz Sharif said on social media.

As the monument turned red, melodious Chinese tunes wafted with the evening breeze to soothe the hearts of officials and public who attended the ceremony to celebrate the bliss of the national day.

The visitors who saw the red hues on the monument immediately realized that the national building wore the luminous red robe to share the joy of China's National Day with the Chinese people who showed support to Pakistan in the hour of need.

In a conversation with Xinhua, Ameer Mujahid, 34, expressed joy at the move of his government to celebrate China's National Day on the occasion.

Mujahid who visited the National Monument after seeing it flashing red color while driving past it, said that such celebrations give a chance to young people to know more about China and educate them about significant days of their close friend China.

"China has recently helped us a lot in flood relief activities, as it was among the first countries to not only give the flood victims financial support, but also moral support by sending well wishes, both of which means a lot during the times of distress," Mujahid told Xinhua.

Khadija Shaukat, a teacher of Pakistan Studies in a reputed institute in Islamabad's twin city Rawalpindi, visited the monument with her family and felt so happy to see the celebration at the national building.

Talking to Xinhua, Shaukat said that she always tells students about the Pakistan-China friendship in her class, and the students keenly learn about the support which China has always extended to Pakistan, strengthening the friendship over the years.

She said that the monument is a pleasant site to behold because of the display of China's radiant colors on it, but also a great display of the significance of China to the government and people of Pakistan.

"The celebration of China's National Day in the heart of Pakistan at the national monument shows that China is so close to the hearts of Pakistanis and they value the friendship with China," she said. 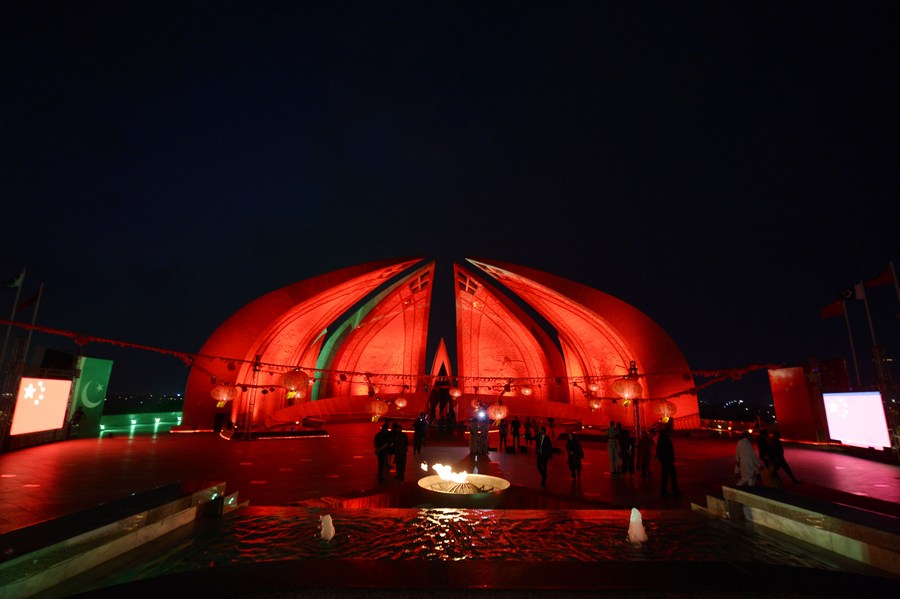 Photo taken on Oct. 1, 2022 shows an event held at the Pakistan Monument to mark the 73rd anniversary of the founding of the People's Republic of China, in Islamabad, capital of Pakistan.(Xinhua/Ahmad Kamal)

Speaking at the event, officials spoke highly of Pakistan's friendship with China.

Zafar Uddin Mahmood, special assistant to the Pakistani prime minister, felicitated the people and government of China on China's National Day and wished further progress to the country.

On social media, the country's Prime Minister Shahbaz Sharif extended the national day greetings to the Chinese people and leadership and said that China, as the second largest economy and a paramount global power, is a source of stability in a perpetually changing world.

"China offers a promise of hope to the developing world beset by multiple crises relating to climate, finance, food and energy. The Chinese template of inter-state relations prioritizes cooperation over confrontation, a governing principle in formation of a community of common destiny," he added.

Chinese Ambassador to Pakistan Nong Rong said that the all-weather strategic cooperative partnership between China and Pakistan is rock-solid and unshakable.

Over the past 71 years since the establishment of diplomatic relations between China and Pakistan, the two countries have always had a high degree of mutual trust, devoted to helping each other, the Chinese ambassador said.