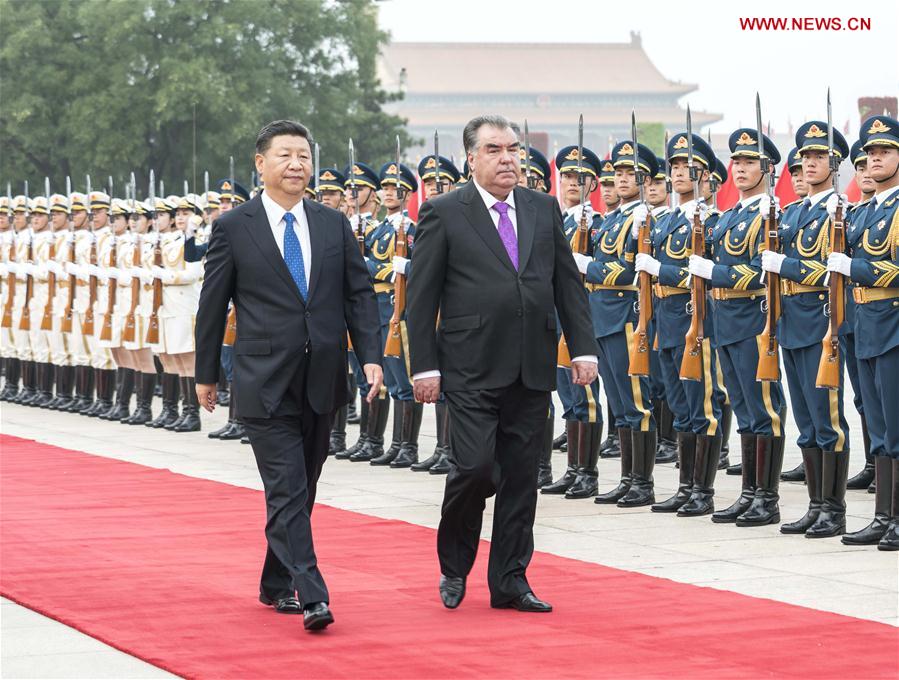 Chinese President Xi Jinping (L) views an honour guard with visiting President of Tajikistan Emomali Rahmon during a welcome ceremony before their talks in Beijing, capital of China, Aug. 31, 2017. Rahmon is paying a state visit to China. During his stay in China, he will attend the Dialogue of Emerging Markets and Developing Countries held in Xiamen, a coastal city in southeast China's Fujian Province. (Xinhua/Li Tao)

Xi encouraged Tajikistan to establish links with Chinese financial institutions, the Silk Road Fund and the Asian Infrastructure Investment Bank, saying China is willing to work with Tajikistan to facilitate trade and investment.

As countries with great ancient civilization, China and Tajikistan can have more exchanges in culture, education and youth, according to Xi.

As rotating chair of the Shanghai Cooperation Organization (SCO), China will work with Tajikistan for SCO progress in politics, the economy, security, culture cooperation and external exchanges, Xi said.

He said the SCO members should intensify partnerships in security, connectivity and trade, and foster an integrated development in the region.

Rahmon described China as a "good neighbor, partner and brother" and praised the close cooperation in politics, culture, trade and investment.

Tajikistan backs the Silk Road Economic Belt and will work with China to expand partnership in finance, agriculture, water resources, energy and mining, among others, Rahmon said.

He said Tajikistan looks forward to more coordination with China in regional and international affairs and more cooperation in law enforcement and security.

Rahmon said his country will give full support for China's work as rotating chair of the SCO.

After the talks, the two heads of state signed a joint statement on establishing comprehensive strategic partnership.

China and Tajikistan agreed to jointly launch cross-border railway, road and natural gas pipeline projects, and explore cooperation in wind and solar energy, according to the joint statement.

Both sides will better share intelligence to fight the "evil forces" of terrorism, extremism and separatism, as well as cyber crime, drug smuggling and transnational organized crime, the joint statement said.

Tajikistan follows the one-China policy, opposes any form of Taiwan independence and supports the Chinese government's effort to achieve national reunification, it said.

The two presidents also witnessed the signing of a series of cooperation documents, including a bilateral cooperation plan, and agreements on science, agriculture, energy, infrastructure, human resources and media.

Prior to the talks, Xi held a red-carpet welcome ceremony for Rahmon at the Great Hall of the People in Beijing.

Rahmon is paying a state visit to China from Aug. 30 to Sept. 1 at the invitation of Xi. He will also attend the Dialogue of Emerging Markets and Developing Countries in Xiamen, a coastal city in southeastern China's Fujian Province.