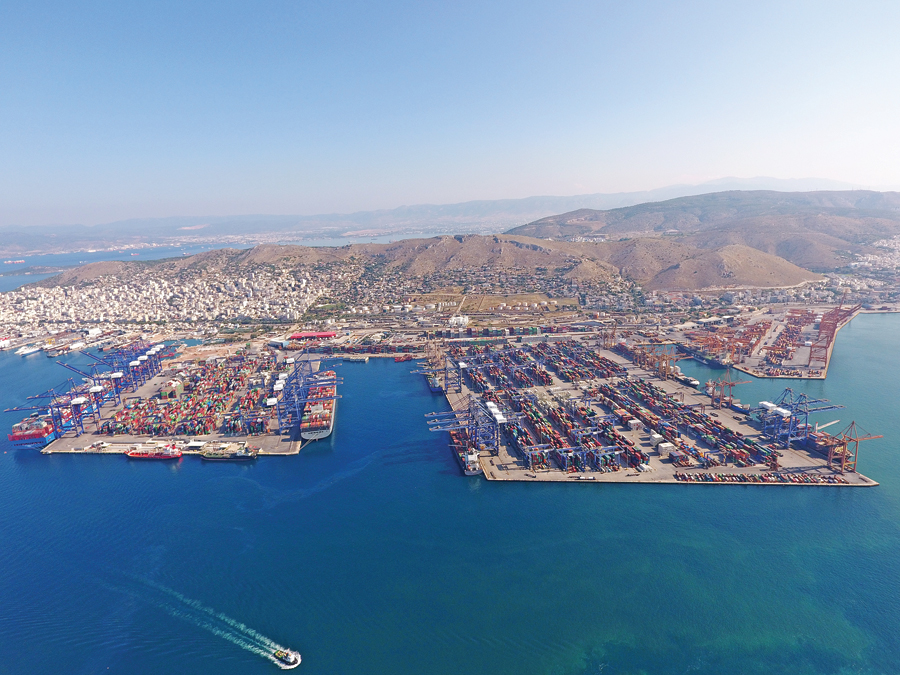 The port of Piraeus in Greece is an example of a BRI success story. (China Daily)

Along the 32-kilometer coastline outside Athens, a forest of cranes at the Port of Piraeus is busy 24 hours a day loading and unloading thousands of containers that are transported between Asia and Europe.

Key to Piraeus' success is investment made since 2008 by China COSCO Shipping, to upgrade its infrastructure. At the time, the Greek government decided to privatize the port's operations amid the country's economic struggles and COSCO Shipping won a 35-year contract to operate the port.

Thanks to the COSCO investment, Piraeus shot up the rankings to become the world's 38th-busiest container port, from 93rd in 2010. During this period, the port has witnessed its handling volumes grow about seven-fold.

"We are witnessing a new era in the history of Piraeus," said Tassos Vamvakidis, commercial manager of Piraeus Container Terminal, a COSCO subsidiary.

Vamvakidis, a Greek employee, proudly points out that out of the 1,900 people PCT employees, only a handful are Chinese and the rest are locals. "COSCO has created local jobs, boosted our local economy, I am proud to be working for this company."

Piraeus' success gives a snapshot of the immense business potential possible through growing trade and connectivity between China and Europe, highlighted by the Belt and Road Initiative, also known as BRI.

Proposed by President Xi Jinping in 2013, the BRI advocates improved connectivity of infrastructure, trade, ideas and knowledge between Europe and Asia. 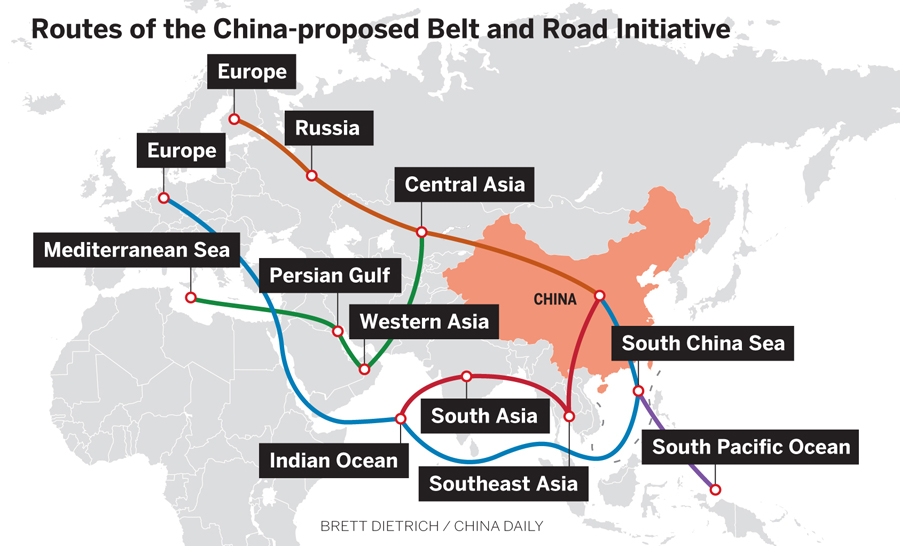 Frequently cited as "project of the century", the initiative impacts almost 70 countries and more than 4.8 billion people. It covers economies worth a combined $21 trillion, accounting for 62 percent of the world's GDP.

Contrary to popular perception, the BRI does not represent a single clearly-drawn trade route, nor is there an authoritative list of BRI projects. Instead, the BRI is a vision that fosters globalization and common prosperity among all countries willing to engage, and is continuously expanding its reach.

For this reason, statistical projections on the BRI's impact can vary, but all forecasts agree on the vision's grand nature. HSBC estimates that Belt and Road development projects will cost up to $6 trillion in the next 15 years, while PricewaterhouseCoopers estimates the cost at $5 trillion. Fitch ratings agency believes that $900 billion of projects were already planned or underway by 2017.

Some projects, like Piraeus, are clearly visible. One example is the Lyon-Wuhan freight rail line, launched in 2016, which greatly reduced transport time and costs compared to sea freight. Since then, thousands of bottles of Bordeaux wine, auto parts and French agricultural products have been exported to China. 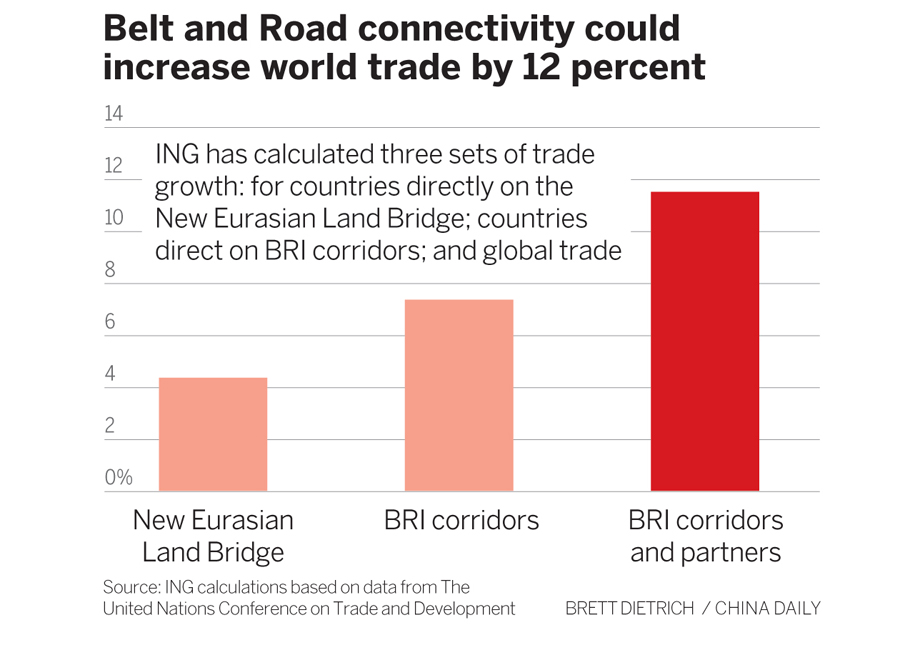 Similarly, the "Silk Road in the air" cargo flight, connecting the trading hubs of Zhengzhou and Luxembourg, launched in 2017 and facilitated the trade of many temperature-sensitive products, such as fresh fruit and pharmaceuticals.

From the heritage-rich Port of Rotterdam to the vast terminal at Duisburg's inland port, logistics hubs all across Europe are busy upgrading their facilities to allow more business from surging trade volumes boosted by BRI connectivity.

Ivona Ladjevac, head of the regional center for the Belt and Road Initiative at the Institute of International Politics and Economics in Belgrade, said the BRI provides a valuable opportunity to strengthen internal connectivity between European countries.

"BRI infrastructure projects can make countries in South Europe closer to the North, decrease transport costs and increase the flow of people and goods," Ladjevac said.

The Dutch financial company ING estimates that a 50 percent reduction in trade costs between countries along the Belt and Road routes could increase world trade by 12 percent.

But Belt and Road opportunities are not just about infrastructure or trade.

"Its goals reach far beyond construction projects, reaching to an ultimate aim of stimulating regional GDP per capita," said Douglas Morton, head of Asia research at Northern Trust Capital Markets. "(The initiative) can bring together Chinese resources with European expertise at a time when global connectivity is becoming increasingly scarce."

Many multinationals are already gearing up to strategically supply technology into Belt and Road countries, in collaboration with Chinese companies.

Germany's Siemens has agreements with more than 10 Chinese companies to supply digital technologies to Belt and Road power, energy, building and manufacturing projects.

Meanwhile, the City of London has heavily campaigned to make London a finance capital for Belt and Road deals, to enforce London's global reach amid Brexit uncertainties.

HSBC has already financed nearly 100 projects in Belt and Road countries. Meanwhile, Standard Chartered funded more than 50 Belt and Road deals in 2017 alone, and last December it announced an additional $20 billion commitment to Belt and Road projects by 2020.

Despite abundant opportunities, the initiative is not free from concern and debate.

"Our member companies are really keen to bid for BRI projects but they do not know how. They feel that the Chinese government should take a lead to share Belt and Road project information online, and in the English language," said Carlo d'Andrea, vice-president at the European Union Chamber of Commerce in China, a non-profit business association with 1,600 member companies.

Bogdan Goralczyk, director of the Centre for Europe at the University of Warsaw, agrees, explaining that making more information publicly available will help to convince European companies Belt and Road contracts are awarded fairly, instead of favoring Chinese companies.

"We need to be convinced on the quality of Chinese proposals. The Belt and Road Initiative gives us an opportunity, but it should respond to some expectations of the European side," Goralczyk said.

Debt sustainability is another concern. Earlier this year IMF's managing director, Christine Lagarde, said at a conference in Beijing that China should beware of financing unneeded and unsustainable projects in countries with heavy debt burdens.

But experts say much of these criticisms are unfounded.

"Notions about possible debt trap created by BRI are not fair at all," said Ladjevac, explaining that many countries currently with high debt levels are in this situation because they took on debt from other funding sources such as the World Bank and IMF.

Ladjevac added that she believes criticism directed at the BRI arises partly because the initiative is relatively new, and many companies are in the early stages of realizing how they can become engaged and many projects are yet to prove their value through concrete results.

"Over time, international companies will become more informed about BRI and will adjust their strategies to realize BRI opportunities", Ladjevac said. 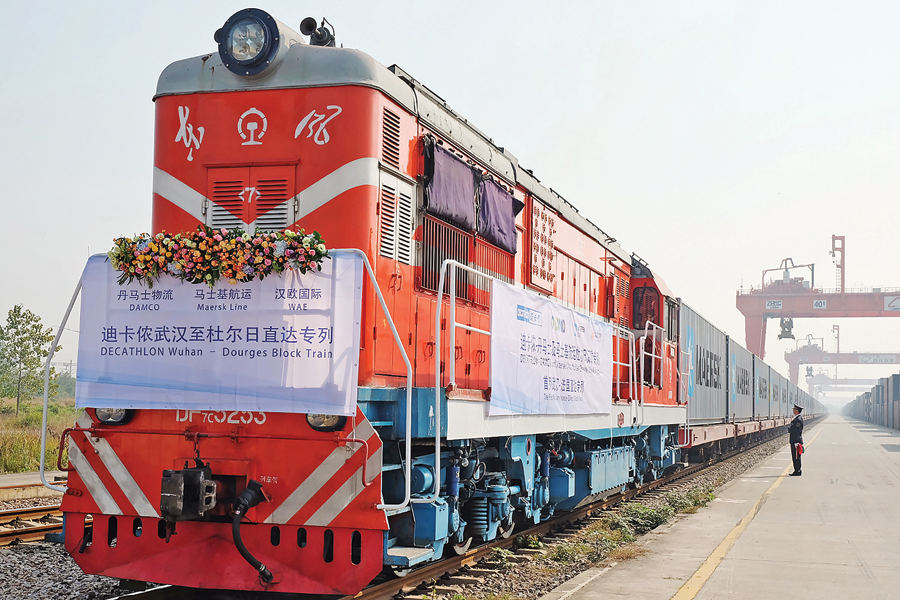 In 2017, the French sports retailer Decathlon started to transport products made in its factory in Wuhan to its warehouses in the North France region of Dourges by direct rail. The company said the option was "more economical, faster and more ecological" than shipping by sea.

The weekly 41-container Decathlon freight train allowed Decathlon's products to reach France in between 16 and 18 days, compared to the 20 days previously needed when transported by sea.

The time and money the company saved as a result boosted Decathlon's profitability, and prompted it to further invest in its Wuhan factory, and its supply-chain procurement from the cities near Wuhan grew by 15 percent.

"We have seen many European companies start or scale-up their manufacturing in Wuhan thanks to the logistics cost saving that can be achieved by direct freight trains, and Decathlon is one early example," said Deng Xinchen, of Wuhan Asia-Europe Logistics, which operates the Decathlon train.

Wuhan Asia-Europe Logistics started operating direct freight trains between China and Europe in 2016, when it spotted a business opportunity in the surging China-Europe trade.

Its trains have linked Wuhan with cities in Russia, Poland, Czech Republic, Germany, and France and the trains allowed many European companies to expand new trade links, to areas that were previously impossible to reach because sea freight was too slow and air freight too expensive.

On average, rail links save 70 percent on costs compared to air freight, and transit times can be cut by as much as 50 percent in comparison to shipping by sea.

Wuhan Asia-Europe Logistics is one of several Chinese companies that began operating direct China-Europe trains in recent years. Industry estimates suggest that, by 2017, such trains already connected more than 30 Chinese cities with 12 European countries. In doing so, they have turned the vision of Belt and Road connectivity into profitability for many businesses in China and Europe. 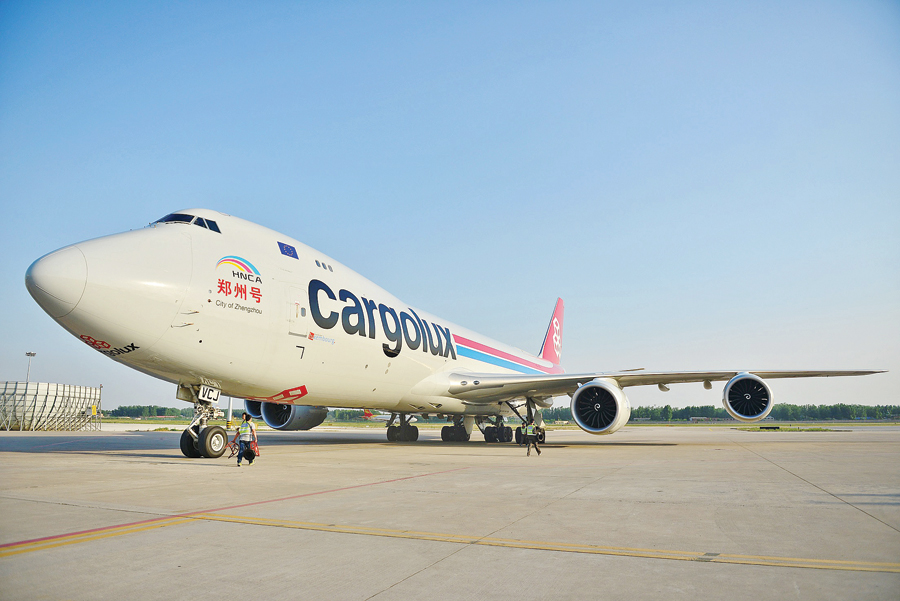 A Cargolux jet in operation on the Zhengzhou-Luxembourg route. (China Daily)

The 8,000-kilometer route, dubbed the "Silk Road in the air", has enabled the trade of many time-sensitive products, including fresh fruit, pharmaceuticals, electronic goods, and car parts. In 2017, Cargolux carried about 150,000 metric tons of freight on the route, nearly a third of the total cargo freight that passed through Zhengzhou.

The link has boosted the economies of Luxembroug and Zhengzhou, provided a new transport option for trading companies, and given Chinese and European consumers the luxury of quickly accessing many products that were previously too far away to be enjoyed.

Ultimately, Cargolux was able to invest in the fleet because of financing from the Industrial and Commercial Bank of China.

As a Chinese bank, ICBC was already very familiar with Zhengzhou as a key transportation hub linking airways and railways with many other Chinese cities. This familiarity gave it good reason to believe that a Silk Road in the air linking Zhengzhou and Luxembourg would have increasingly growing cargo volumes into the future.

Meanwhile, ICBC's Luxembourg branch had developed trust in Cargolux as a client, after working with the company for several years on smaller projects.

"The combination of these two factors gave us the confidence to issue the loan to Cargolux, and trust that it will be repaid," said Chen Fei, general manager of ICBC's Luxembourg branch.

The project, officially launched last year during a meeting between President Xi Jinping and Luxembourg Prime Minister Xavier Bettel, has since become a commonly cited example of growing connectivity in the spirit of the Belt and Road Initiative.