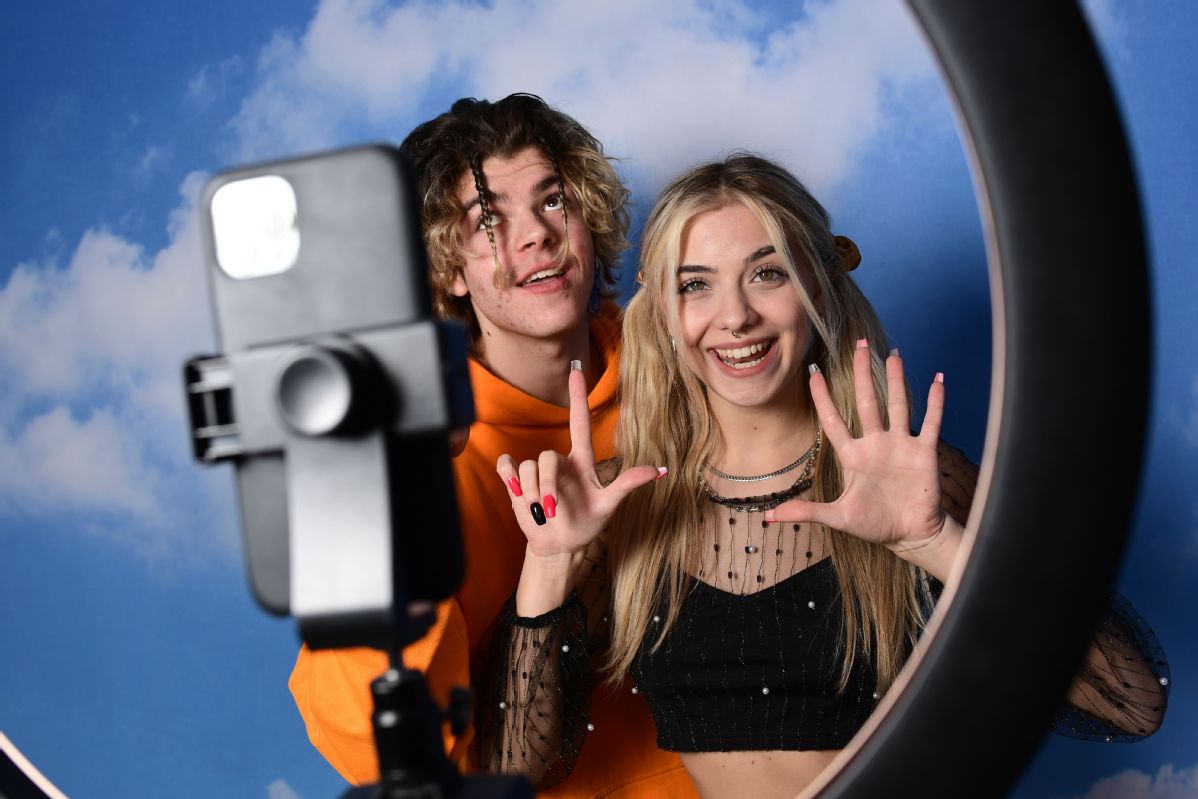 TikTok influencers participate in an online event in Milan. [Photo/Agencies]

Wang Wei, general manager of AppsFlyer Greater China, said the company has grown a solid customer base in the country. "We have about 70 percent of the market share in the global marketing analytics segment, and the corresponding figure for the Chinese market is about 80 percent."

Over half of AppsFlyer's customers in China are game advertisers, both in terms of quantity and the revenue they bring to the company, he said.

"Gaming enterprises are among the first Chinese companies to explore overseas markets. We noticed their efforts as early as before 2010," Wang said, adding that they are very stable, whether the economy is good or times are challenging, such as during the COVID-19 pandemic, and AppsFlyer's revenue from gaming is growing continuously.

According to Wang, the other half of its customers are Chinese companies that are at the forefront of global trends, which have changed over time.

"Whether they are financial tech or short-video companies, Chinese companies are growing fast," Wang said.

Currently, cross-border e-commerce businesses are also an active force in exploring foreign markets by selling Chinese goods to consumers online. They do not just market their apps to overseas buyers but are dedicated to solving local logistical issues, which are more time-consuming and challenging.

Alibaba, for instance, said it has invested heavily to introduce its Cainiao supply chain and tracking system in 152 countries and regions. The ability to enable consumers to know where a package is and when it will arrive in logistically challenging environments is critical.

As Chinese companies expand their overseas influence, some of them are pushing into the competitive platforms of global advertising networks, according to AppsFlyer's 14th edition of its Performance Index, an industry report that ranks the top media sources in mobile advertising. The report analyzed a total of 610 media sources, 25 billion app installs and over 18,000 apps from July to December 2021.

Chinese advertising platforms Bigo Ads, Transsion and Simeji, for instance, have grown rapidly, occupying the top three spots on the global Android growth index, according to the AppsFlyer report.

"The three Chinese advertising platforms climbed the ranks rapidly, partly because it is convenient for Chinese advertisers to communicate with them. But it also reflects that these platforms, which have amassed sizable user bases, started ramping up the push to turn traffic into revenue," Wang said, adding that they are still in the early stages and the traffic is not expensive, which encourages both Chinese and foreign advertisers to spend money marketing their products on these platforms.

TikTok For Business, an advertising service of Chinese short-video company TikTok, performed extremely well this year, placing second in the power and volume rankings in engagement for non-gaming apps, as well as second in the in-app purchases power ranking in gaming. It trailed only Meta, the parent company of Facebook, in these rankings, according to the AppsFlyer report.

Wang said he has witnessed the rise of TikTok as a globally attractive advertising platform. At the end of 2015 when Bytedance, the parent company of TikTok, started exploring overseas markets, Wang visited its overseas business team which had only a few dozen workers.

"Currently, AppsFlyer sees a double-digit revenue growth in China," Wang said. "In the future, on top of mobile internet companies, more Chinese companies from traditional sectors will go global. That may take time but it will be a big tide."

In December, AppsFlyer unveiled a privacy cloud service in collaboration with US chip giant Intel, which can assist Chinese companies in going global by sharing data.

Amid the COVID-19 pandemic, Chinese companies are continuing to expand their overseas business, despite challenges, according to a report issued by Google and Kantar Group, a data analytics and brand consulting company.

Annabel Lin, managing director of China solution specialists and Asia-Pacific international growth at Google, said earlier in a statement that Chinese companies that have invested in building their brands can achieve sustainable, quality growth and find resilience. During challenging times, those brands have managed to stay the course and increase their trust and relevance with consumers around the globe.