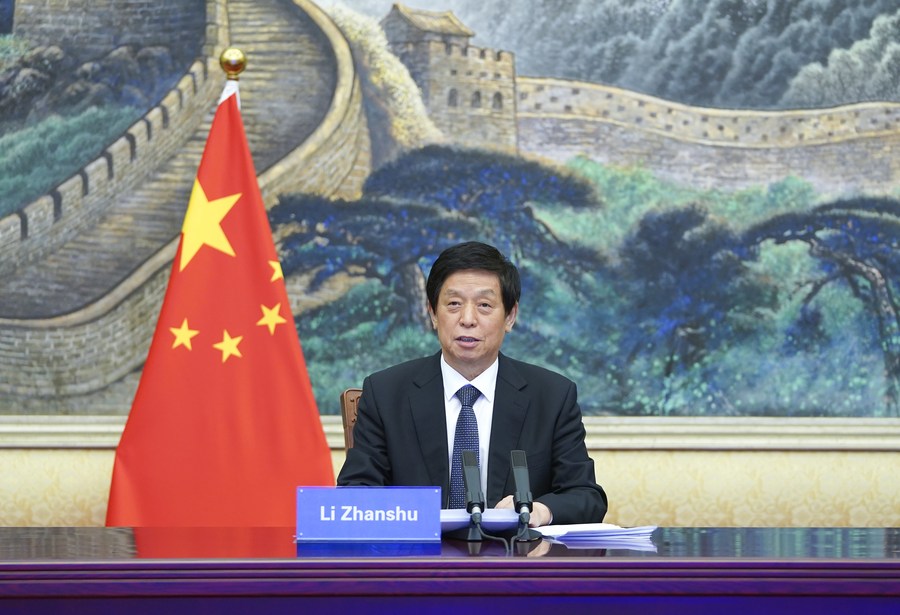 Li Zhanshu, chairman of the National People's Congress (NPC) Standing Committee, holds talks with Manzoor Nadir, speaker of the National Assembly of the Parliament of the Cooperative Republic of Guyana, via video link at the Great Hall of the People in Beijing, capital of China, June 15, 2022. (Xinhua/Zhang Ling)

Li, chairman of the National People's Congress (NPC) Standing Committee, said that political mutual trust is a solid foundation and a significant guarantee for the healthy and stable development of China-Guyana relations.

Noting the economies of China and Guyana are highly complementary, Li said there is massive potential to synergize the Belt and Road Initiative with Guyana's Low-carbon Development Strategy 2030 and expand cooperation in trade and investment, climate change, and culture and health.

He emphasized the NPC is willing to strengthen exchanges and cooperation with the National Assembly of Guyana to promote the steady and long-term development of the traditionally friendly relations between the two countries.

Nadir said that Guyana attaches great importance to developing relations with China and firmly abides by the one-China principle. He congratulated China on its tremendous development achievements and thanked China for its important support in the fight against COVID-19.

The National Assembly of Guyana looks forward to joint efforts with the NPC to strengthen the rule of law exchanges and play a positive role in promoting pragmatic cooperation between the two countries in all areas, Nadir added.