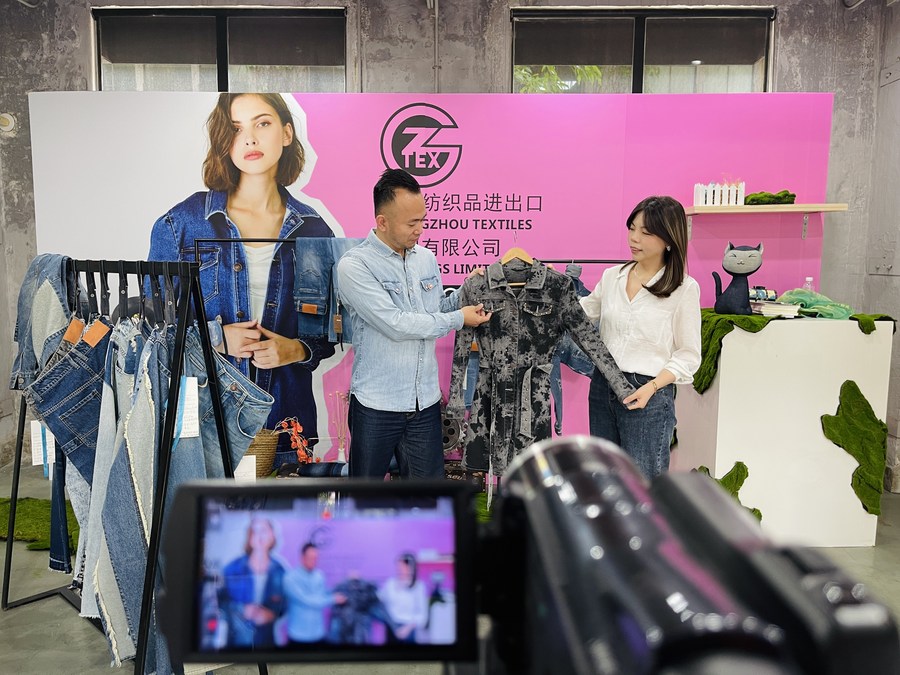 Exhibitors introduce products on a livestream at the booth of Guangzhou Textiles Holdings Limited during the China Import and Export Fair in Guangzhou, south China's Guangdong Province, April 15, 2022. (Xinhua)

Faced with the resurgence of COVID-19 at home and the continuous spread of the epidemic worldwide in 2022, China continues to forge various matchmaking platforms for international trade, with multiple related events successfully held in the country in the January-May period this year, yielding fruitful results and contributing a lot to the world economic and trade recovery.

From April 15 to April 24, the 131st session of the China Import and Export Fair, also known as the Canton Fair, was held online. According to Xu Bing, spokesperson for the fair, the number of overseas purchasers registered for this session of the Canton Fair hit a record high of 536,000 from 228 countries and regions, up 48 percent from the 129th session and 41.8 percent from the 130th session. Besides, the 25,500 exhibitors of this Canton Fair have uploaded a total of 3,052,100 exhibits, including 951,500 new products, all setting new records.

It's learned that the online platform for this Canton Fair ran smoothly, with the official website of the fair seeing 10.09 million visitors and 33.9 million visits. A total of 210,500 electronic business cards were issued by exhibitors, and about 100,000 online conversations were held by overseas buyers. In addition, 50 supply and procurement activities were held, covering eight provincial-level regions in China and attracting nearly 4,000 overseas purchasers to participate in.

On April 28, a cross-border e-commerce video exchange meeting was held on the China-ASEAN Expo platform online. This is the first online trade matchmaking event held on the platform in 2022 which aims to help enterprises and products from the Association of Southeast Asian Nations (ASEAN) countries to enter the Chinese market through a cross-border e-commerce channel.

More than 1,400 businessmen at home and abroad attended the event, and representatives from JD.com and other Chinese enterprises exchanged views with enterprises from ASEAN countries on customs clearance, taxation, financial policies and market conditions.

From April 28 to May 12, with the joint guidance from the Ministry of Commerce and other authorities, the 4th Brand and Quality Online Shopping Festival & Quality African Products Online Shopping Festival was held, during which featured products from 23 African countries were brought to Chinese consumers through live broadcasts by ambassadors, connecting with African anchors and other means.

This event has greatly promoted the sales of African products in China. For instance, the sales of the black tea in Kenya and that of the coffee in Ethiopia increased by 409 percent and 143.1 percent year on year, respectively.

-- More matchmaking events are on the way

As the epidemic situation in China tends to be stable, the exhibition industry of the country will usher in a grand occasion. More than 100 exhibitions across the country are scheduled to be held in June, July and August.

According to the latest statistics provided by the organizing committee for the second China International Consumer Products Expo (CICPE) on June 14, companies and brands from 58 countries and regions (including China) have confirmed to participate in the expo which will be held from July 26 to 30 in Haikou, capital of south China's Hainan Province.

The exhibition area of this year's consumer products expo covers 100,000 square meters, including 80,000 square meters of international exhibition area, which will be used by more than 700 exhibitors and 1,300 brands. A series of activities with rich content and various forms will be held during this expo, and many global leading brands will also launch new product debut events.

According to the organizing committee for the fifth China International Import Expo (CIIE), a total of 260 Fortune 500 companies and industry-leading enterprises have confirmed their participation in the fifth CIIE.

The expo has recently announced to provide special support such as reduction and exemption of construction fees for eligible exhibitors, and to extend the deadline for registration to July 31. In addition, the fifth CIIE has also pioneered two-way information disclosure of the purchasers' demands and exhibitors' supplies. As of early June, information on 53 exhibits or services has been made public, and more than 400,000 purchasers that have participated in the previous four CIIEs have received accurate information on the exhibits through e-mails, text messages and other means.

The 2022 China International Fair for Trade in Services (CIFTIS) will be held in Beijing in September in a combination of online and offline approach. This year's fairwill focus on hot trends in service trade, highlight digital and green development, and involve topics like telecommunications, computer and information services, financial services, cultural and tourism services, education services, sports services, supply chain and business services, engineering consulting and construction services, health services, and environmental services.

During the event, the global service trade summit, exhibitions, forums and conferences, promotion and negotiations, results release and supporting activities will also be held, and there will bemore than 100 exchanges and negotiation activities and exhibitions of no less than 126,000 square meters.

Driven by the new development pattern, China will spare no effort to smooth the international and domestic circulations, building more trade matchmaking platforms to contribute more to global economic development.

The international exhibition industry has begun to shift its focus from Europe and the United States to emerging economies in Asia-Pacific, and showed an increasingly apparent trend of extending to emerging markets in developing countries such as China, said Hai Yang, a special commentator of Hainan Broadcasting Group, when he was a guest on a local live news program.

CICPE, CIIE, the Canton Fair, and CIFTIS will become the "four iconic exhibitions of China" that declare China's determination to open up to the world, demonstrate China's strength in opening-up, and connect China with the world, stated Hai.