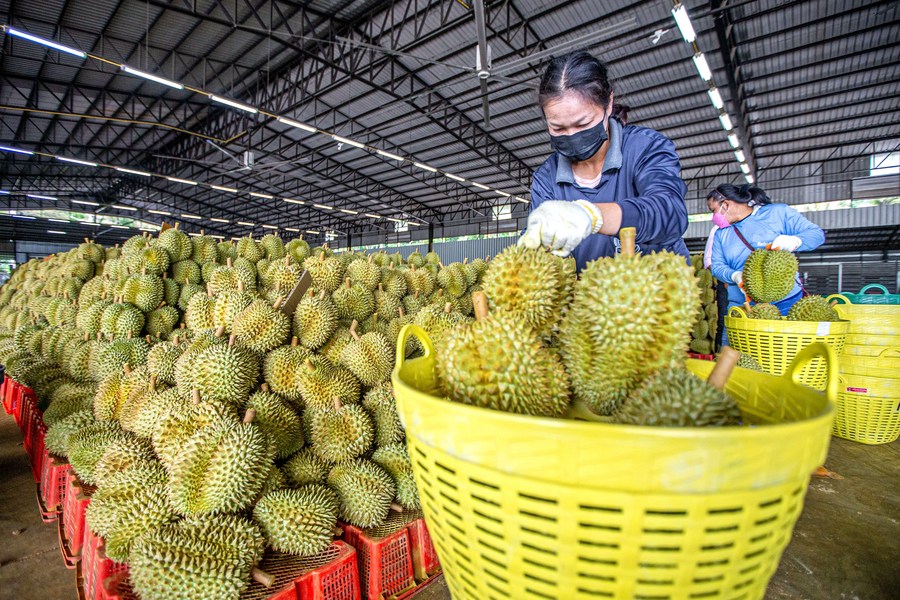 A worker arranges durians at a durian processing factory in the Chanthaburi province, Thailand, May 5, 2022. (Xinhua/Wang Teng)

The Regional Comprehensive Economic Partnership (RCEP) has been in effect for six months and brought huge benefits to import and export businesses and consumers, with its member countries expanding to 13 from 10, reported China Securities Journal Wednesday.

According to statistics of Beijing Customs, in the first half of 2022, 770 million yuan of import and export goods in Beijing have benefited from the RCEP, and 687 million yuan of goods of local export enterprises have enjoyed tariff reduction of about 6.87 million yuan in the importing countries.

Japan has become the largest destination for RCEP-related certificates of origin of Beijing, in which 1,602 such certificates have been issued, involving a goods value of 103.5127 million U.S. dollars, noted Wang Wei, an official from Beijing Customs.

"The implementation of the RCEP is a great boon to our company. With the certificates of origin issued by the customs, the tariff on goods exported to Japan has been reduced from 10 percent to 8.2 percent, which is equivalent to a 20 percent discount, meaning the increase of the enterprise's revenue and the improvement of the competitiveness of the products", said Duan Tao, general manager of Chinatex International Apparel Co., Ltd., a company engaging in trade with Japan.

As the largest institutionally-open platform worldwide, the RCEP involves about 30 percent of the world's population, economic aggregate and trade value, and contains huge market potential. With the implementation of the trade pact, related industries are embracing new development opportunities.

Guangzhou Baiyun International Airport is one of the three major aviation hubs in China with a global air route network, including 23 air routes connecting China with other RCEP member countries. Driven by the RCEP, more Japanese household appliances, fruits from Southeast Asian countries, cosmetics from the Republic of Korea and other goods are entering the Chinese market.

In the first half of this year, more than 100,000 tonnes (metric tons) of goods from other RCEP member countries have entered China through the airport, registering a year-on-year increase of 49.8 percent.

According to statistics of Guangzhou Customs, in the first half of this year, enterprises declared to the Customs for the import of 2.91 billion yuan of goods under the RCEP, enjoying tariff reduction of 58.984 million yuan. These goods are mainly hot-rolled plates, engine parts and fruits from Japan, Thailand and other countries.

The implementation of the RCEP has not only brought tax benefits to foreign trade enterprises, but also improved the efficiency of customs clearance.

Recently, under the supervision of Taicang Customs affiliated to Nanjing Customs, 2,002.6 tonnes of lubricant base oil imported by PetroChina International Northeast Co., Ltd. from the Republic of Korea were successfully cleared with RCEP origin declaration, and the company is expected to enjoy a preferential tax reduction of about 135,500 yuan.

The implementation of RCEP enables foreign trade enterprises to usher in broader policy opportunities, and helping enterprises take full advantage of RCEP preferential policies and actively explore the international market is crucial to maintain the stable and long-term development of an open economy, said Zhou Yusheng, an official from Nanjing Customs.