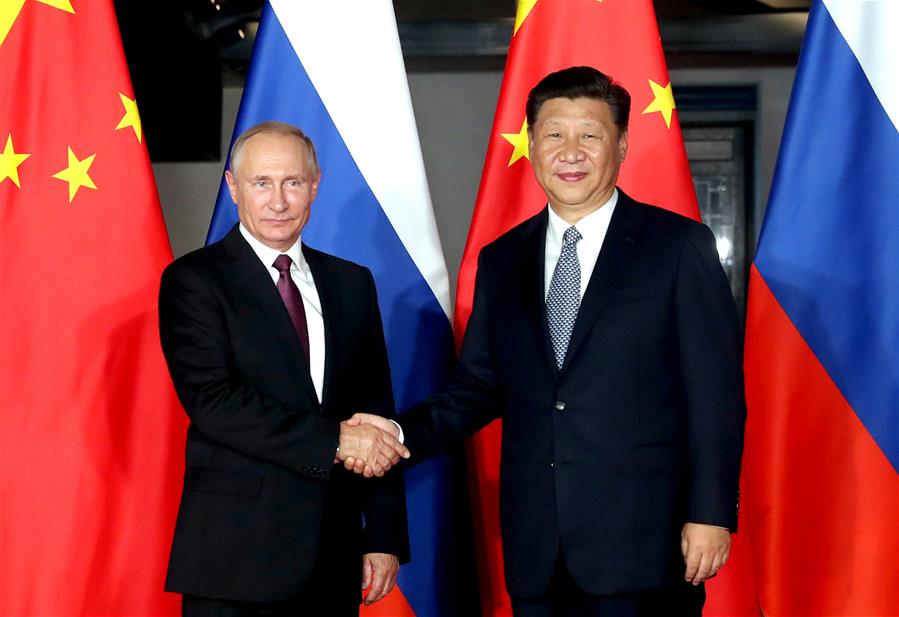 The two leaders also agreed to appropriately deal with the latest nuclear test conducted by the Democratic People's Republic of Korea (DPRK).

Putin is in the southeastern Chinese coastal city of Xiamen, Fujian Province, to attend the ninth BRICS summit and the Dialogue of Emerging Market and Developing Countries scheduled for Sept. 3-5.

The role of bilateral cooperation mechanisms should be well played to advance projects in key areas including energy, aerospace and aviation, as well as nuclear power.

He urged advancing the integration of the Belt and Road Initiative with the Eurasian Economic Union.

Mutual understanding and friendship between the two peoples should be promoted through closer people-to-people and cultural exchanges and those at local levels, he said.

China is willing to join hands with Russia to raise the bilateral relations to a higher level, promoting respective development and jointly safeguarding regional and world peace and stability, he said.

The BRICS countries should consolidate solidarity and cooperation to send out positive signals to the world, chart the course and define the priorities for cooperation based on the overall situation, strengthen coordination to enhance international influence, and improve mechanisms of BRICS cooperation, said Xi.

China is willing to work with Russia and other BRICS countries to achieve fruitful results at the Xiamen summit and implement the outcomes effectively so that the BRICS can usher in a second "golden decade" of cooperation.

For his part, Putin said it is significant for China and Russia to strengthen comprehensive strategic partnership of coordination and boost communication and coordination on major international and regional issues.

He said Russia stands ready for closer cooperation with China in such areas as investment, energy, agriculture, infrastructure, and aerospace and aviation.

The two countries should also increase exchanges in culture, education, sports, media and tourism as well as those at local levels. Military exchanges should be closer, he said.

While discussing international and regional issues, the two leaders agreed to appropriately deal with the DPRK's latest nuclear test.

The DPRK on Sunday successfully detonated a hydrogen bomb that can be carried by an intercontinental ballistic missile (ICBM), DPRK's Central Television announced. This was the sixth nuclear test the DPRK has undertaken.

Xi and Putin agreed to stick to the goal of denuclearization on the Korean Peninsula and keep close communication and coordination to deal with the new situation.

After the meeting, the two leaders visited an exhibition on intangible cultural heritage originated from southern Fujian Province.