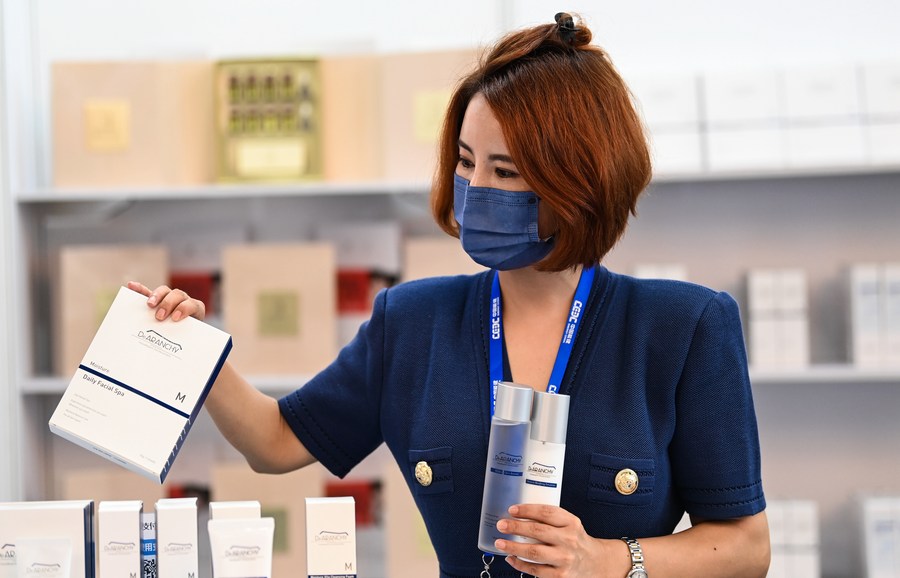 NANNING, Sept. 17 (Xinhua) -- Ding Xue, a representative of DeARANCHY, a skincare brand from the Republic of Korea (ROK), has been running around at the ROK pavilion during the ongoing 19th China-ASEAN Expo.

The expo, which opened on Friday and runs until Sept. 19, spotlights the theme -- "Sharing RCEP New Opportunities, Building a Version 3.0 China-ASEAN Free Trade Area." It is currently being held in Nanning, capital city of south China's Guangxi Zhuang Autonomous Region.

"This is the first time for us to participate at the expo. All our products are imported from the ROK. After the implementation of the Regional Comprehensive Economic Partnership (RCEP), import tariffs have been lowered accordingly, which has increased our price competitiveness," Ding said.

According to Lee Youn Sik, deputy director of the Korea Trade-Investment Promotion Agency Guangzhou office, products from 127 ROK enterprises are on display at this year's expo.

"Guangxi is the only region in China connected with ASEAN both by land and sea. More ROK companies hope to explore business opportunities in ASEAN countries by participating in the China-ASEAN Expo," noted Lee.

"The free trade agreements between the ROK, China and ASEAN have given strong support to regional economic cooperation. And the RCEP, which all three parties have joined, came into force at the beginning of this year, providing broader opportunities for regional multilateral cooperation," said Ahn Duk-geun, the ROK's trade minister, in his speech at the opening ceremony of the expo.

The landmark RCEP is the world's largest free trade deal to date. The RCEP countries account for roughly 30 percent of the world's gross domestic product and population. Over 90 percent of trade in goods among approved member states will gradually become tariff-free.

Since it came into force on Jan. 1 this year, the agreement has delivered trade dividends, boosted the foreign trade of member countries and expanded the circle of regional economic and trade cooperation.

"RCEP is a win-win for all of us. It will expedite regional economic integration, attract investment, and expand market and supply chains amid an uncertain global economic outlook. Since the entry into force of the RCEP, Thai and Chinese entrepreneurs are reaping mutual benefits as a consequence," said Thai Deputy Prime Minister and Foreign Minister Don Pramudwinai.

The RCEP has also brought tangible benefits to companies in Guangxi, a vital gateway for exchange and cooperation between China and the ASEAN.

According to data provided by Nanning Customs, in the first eight months of this year, Nanning Customs had issued a total of 1,165 RCEP certificates of origin with a value of 541 million yuan (about 78 million U.S. dollars). In August alone, Guangxi's trade with RCEP partner countries reached 32.14 billion yuan, an increase of 22.7 percent year on year.

"This agreement (RCEP) offers local businesses wider market access and the opportunity to improve regional supply chains and diversify their respective production networks, while helping to reduce the cost of doing business," said Malaysian Prime Minister Ismail Sabri Yaakob, while delivering a speech at the opening ceremony via video-link.