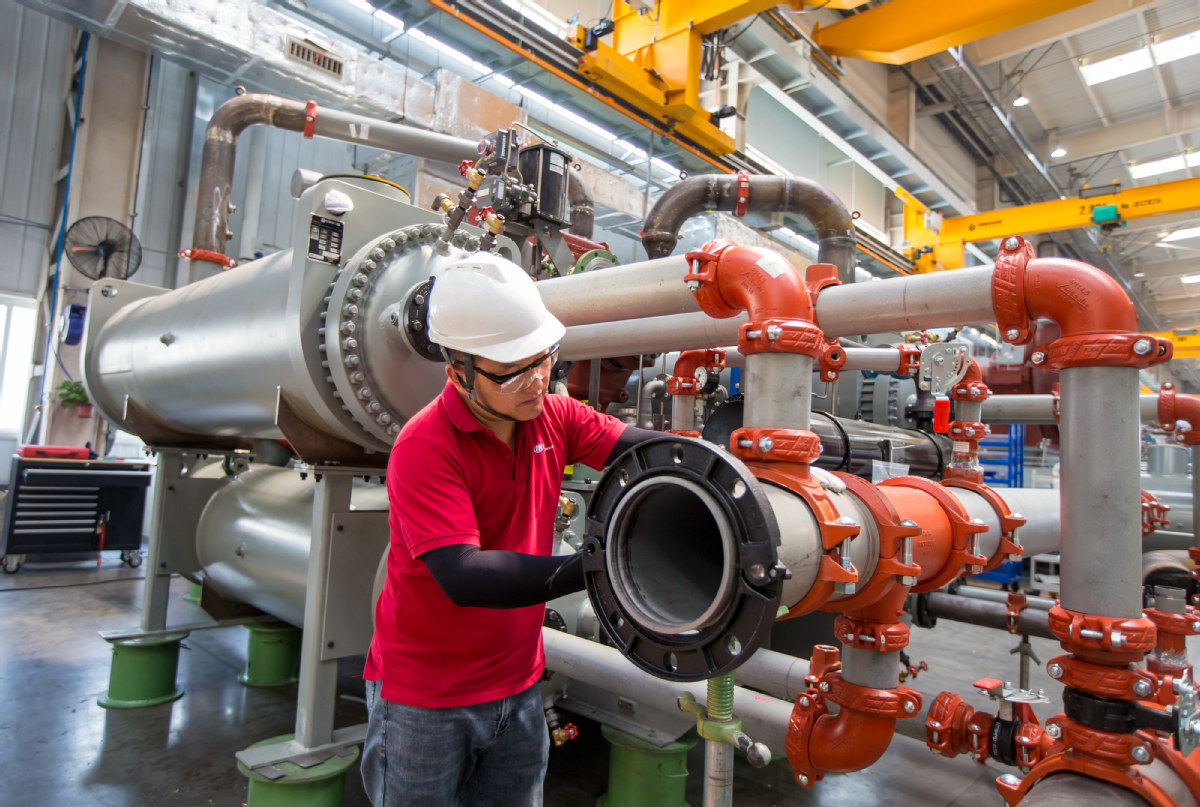 An employee works on the production line of a foreign-funded machinery manufacturer in Suzhou, Jiangsu province. ZHAI HUIYONG/FOR CHINA DAILY

Executives of multinational companies are calling for more efforts to deepen international cooperation in safeguarding the stability of supply chains while highlighting the important role China plays in global industrial chains.

Jean-Pascal Tricoire, chairman and CEO of Schneider Electric, said via video link at the International Forum on Resilient and Stable Industrial and Supply Chains－which concluded in Hangzhou, Zhejiang province on Tuesday－that the company supports globalization and believes that globalization will continue.

China is one of the company's most important centers, which integrates research and development, supply chains, sales and service. The company also has a complete ecosystem of local suppliers and integrators here, Tricoire said.

He said China is currently Schneider Electric's second-largest market and one of its most important R&D bases in the world, as the nation accelerates industrial digitalization and pays increasing attention to sustainable development.

Together with local partners, the company has developed a set of technologies suitable for both China and the whole world, Tricoire added.

The comments came as strengthening the resilience and stability of global industrial and supply chains is widely seen as vital to supporting economic recovery of all countries, ensuring the smooth running of the world economy and improving the wellbeing of humanity.

As the COVID-19 pandemic has affected almost every part of the value chain, from raw material sourcing to end customers, companies are looking to get back on track when it comes to disruption and innovation. About 67 percent of surveyed CEOs said that they will increase investment in disruption detection and innovation processes, according to a 2022 report from consulting firm KPMG.

Florence Verzelen, executive vice-president of Dassault Systemes, a French industrial software company that creates 3D models for multiple industries, also said via video link at the forum that humanity is a community with a shared future. Only by mutual cooperation can the world usher in the greatest development, and only by seeking common ground while reserving differences can people coexist harmoniously.

Europe has high-end manufacturing and high-end digital industrial software, and China has a massive consumer market and huge manufacturing capacity. Strengthening economic and trade cooperation between China and Europe will not only help stabilize global trade, investment and industrial and supply chains as well as inject more growth impetus into the world economy, but also help solve common problems faced by mankind, such as climate change and an aging society, Verzelen said.

Thomas Schmid, president of BMW (China) Service, also said via video link that the complexity of the automotive supply chain is second to none in the world today. Ensuring the stability and resilience of the company's global supply chain network is critical to its continued commercial success. International cooperation is not only necessary, but also the key to reducing and eliminating uncertainties and solving problems.