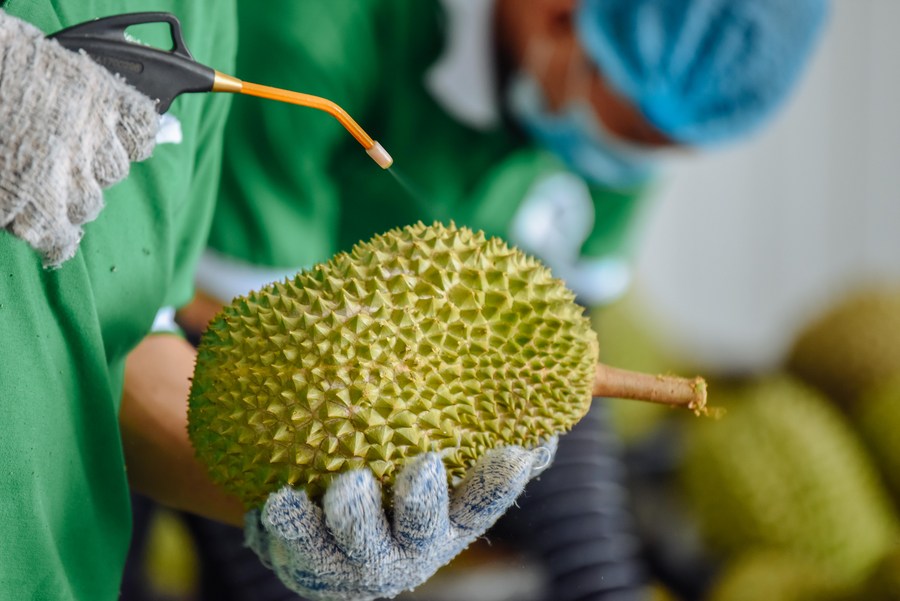 A worker cleans a durian at a durian processing factory in Pahang, Malaysia, June 18, 2019. (Xinhua/Zhu Wei)

As RCEP took effect early this year, agricultural businesses in ASEAN countries have benefited from lower import costs and more export opportunities due to lower tariffs. Under the agreement, more than 90 percent of trade in goods within the region will eventually be tariff-free, greatly boosting cross-border trade.

PHNOM PENH, Nov. 11 (Xinhua) -- From Cambodian rice, Thai fragrant coconut to Vietnamese passion fruit and durian, a growing number of agricultural products from the countries of the Association of Southeast Asian Nations (ASEAN) now have easier access to the Chinese market since the implementation of the Regional Comprehensive Economic Partnership (RCEP).

In the eyes of many agricultural business owners in ASEAN countries, the gradual implementation of RCEP rules has significantly reduced intra-regional trade costs and further facilitated trade, bringing tangible benefits to them. 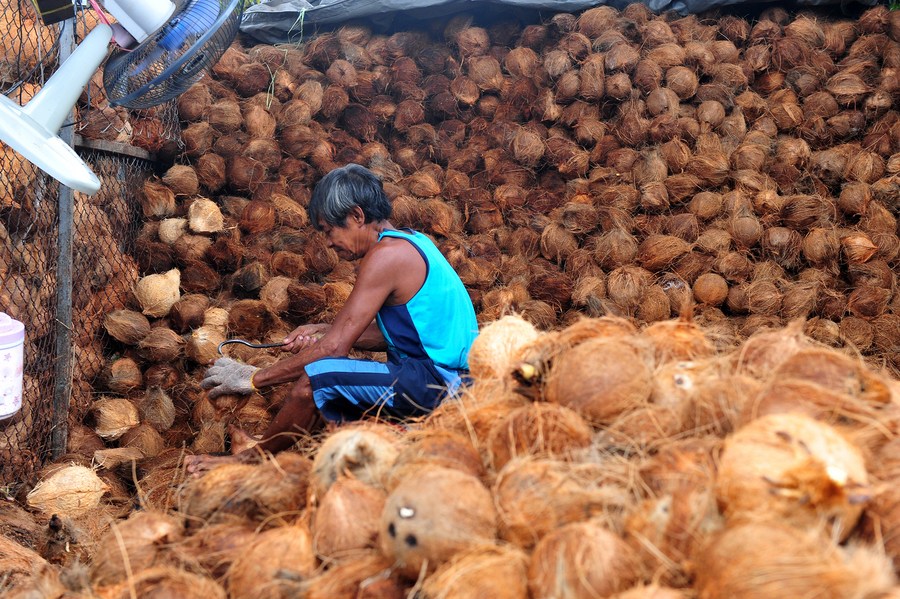 As RCEP took effect early this year, agricultural businesses in ASEAN countries have benefited from lower import costs and more export opportunities due to lower tariffs.

Under the agreement, more than 90 percent of trade in goods within the region will eventually be tariff-free, greatly boosting cross-border trade.

"We are no longer worried about export orders as before. The industrial chain adjustment brought about by RCEP has boosted our product sales in the Chinese market," said Narongsak Chuensuchon, chairman of NC Coconut, a company in Thailand's Ratchaburi Province.

Narongsak's company gained access for its products to the Chinese market in 2013, and sales have increased several times in just a few years. China has become a major export market for the company's coconut products, he said.

Since the beginning of this year, Vietnamese passion fruit and durian have been approved to enter the Chinese market.

"This is good news for Vietnam, which has rich fruit resources," said Do Thi Thu, a lecturer at the Vietnamese Banking Academy, hoping that more Vietnamese agricultural products could be exported to China in the future, so as to give full play to the complementary advantages of resources between the two countries and make full use of RCEP to push forward bilateral trade relations. 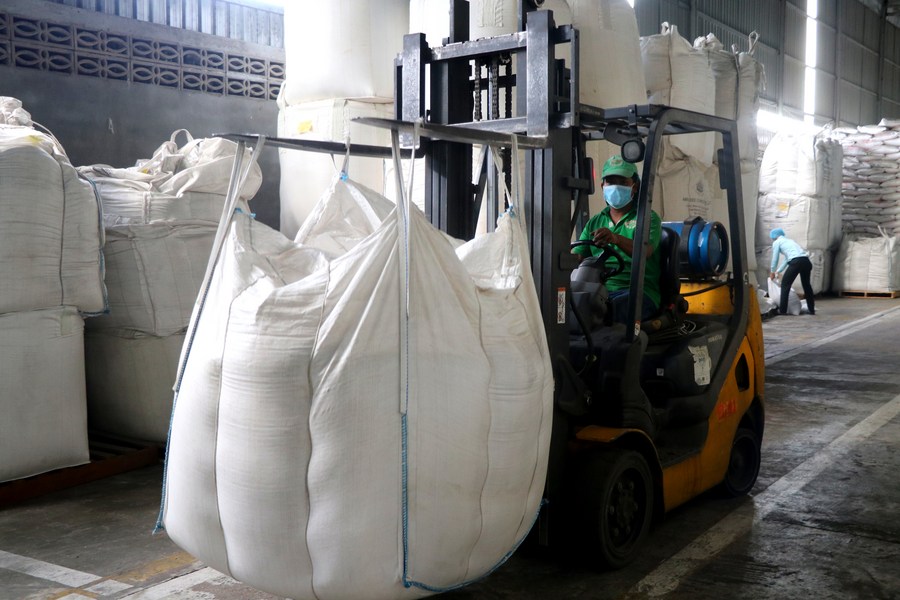 CROSS-BORDER CARGO ON THE RISE

Since late October, Cambodia's jasmine rice has entered its harvest season. Cargo ships loaded with the fragrant rice depart from Sihanoukville or Phnom Penh, and arrive at Shekou Port in the city of Shenzhen, China within a week.

After going through inspection and quarantine of customs at the port, the rice sized 5 kg per bag can directly enter the retail market, while the larger packages of 25 kg or 50 kg will go to the wholesale link to supply large grain users, or be put on the market after being repackaged into smaller sizes by rice-processing enterprises.

China is one of Cambodia's largest rice export markets. Cambodia exported more than 230,000 tonnes of rice to China in the first 10 months this year, accounting for nearly half of its total exports, data from the Cambodia Rice Federation showed.

In recent years, major projects such as the New International Land-Sea Trade Corridor and the China-Laos Railway, as well as improved infrastructure such as cold chain and cold storage, have made it increasingly convenient for agricultural products from ASEAN countries to enter the Chinese market. 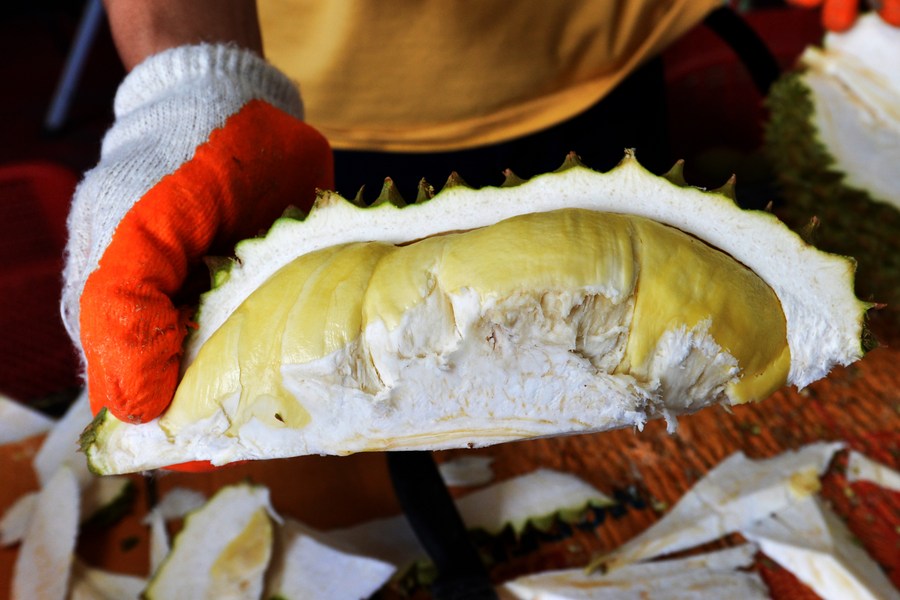 A worker shows the pulp of a durian in Bangkok, Thailand on June 1, 2022. Local durian farmers welcome a bumper harvest in Thailand. (Xinhua/Rachen Sageamsak)

Taking Thai durian as an example, in addition to air transport to the Chinese market, there are also land transport options, as well as marine transport from Thailand's Laem Chabang Port to China's Qinzhou Port in Guangxi Zhuang Autonomous Region, Guangzhou Port and Nansha Port in Guangdong province, among others.

In the first 10 months of this year, the New International Land-Sea Trade Corridor saw 621,026 twenty-foot equivalent unit containers transported by the rail and sea, up 19.7 percent year-on-year, the latest data showed.

At present, more than 640 categories of items can be transported by the rail and sea through the New International Land-Sea Trade Corridor.

Statistics from China Railway's Kunming bureau showed that the total quantity of freight transported by the China-Laos Railway had exceeded 10 million tonnes as of Nov. 7, with the cross-border cargo transportation volume topping 1.8 million tonnes and its value hitting 12 billion yuan (about 1.7 billion U.S. dollars).

So far, 25 provincial-level regions in China have operated international freight trains on the China-Laos Railway, and freight transportation has covered countries including Laos, Thailand, Myanmar and Singapore. The cargo has expanded to more than 1,200 categories, including chemical fertilizers, electronic and photovoltaic products, and cold-chain fruits. 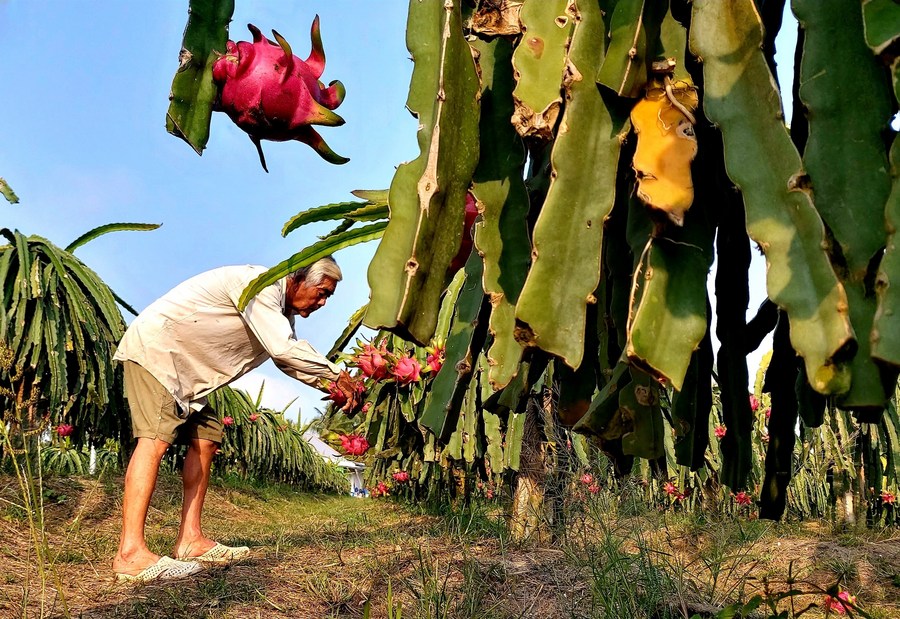 A farmer works at his dragon fruit farm in Thoi Lai district, Can Tho province, Vietnam, Jan. 26, 2022. (VNA/Handout via Xinhua)

For Narongsak, RCEP can drive the formation and expansion of emerging industries in the region and promote the transformation and upgrading of traditional industries.

"While China is our largest export market, we pay more attention to improving product quality and enhancing competitiveness," he said, adding that the company now exports coconut jelly and bottled coconut water to China in addition to fresh coconuts.

"In the past, when we planted durians, we watered or fertilized them based only on our experience, and sometimes got frustrated because the trees did not grow well," Malaysian durian orchard owner Leong Pui Sam told Xinhua.

Sam, who plants the famed Malaysian Musang King durian, said that ever since his farm adopted a smart farming system co-developed by Regaltech and Alibaba Cloud, planting durians is now much more cost-and-time efficient with smart data collection and analysis.

The traditional mode was importing raw materials first then processing, now it has largely been changed to processing raw materials at the place of origin first, then the products will be traded, which has not only optimized the regional economic form but also reduced unnecessary waste, the general manager said.