Children wash their hands before a meal at a kindergarten in Kimuka, Kenya, on Nov. 10, 2022. (Xinhua/Dong Jianghui)

Virginia Tarasha is standing in her vegetable garden watering her crops and is hoping for a bumper harvest in the next few months despite the biting drought that has affected most parts of Kenya.

NAIROBI, Nov. 20 (Xinhua) -- Virginia Tarasha is standing in her vegetable garden watering her crops and is hoping for a bumper harvest in the next few months despite the biting drought that has affected most parts of Kenya.

The 48-year-old mother of three has a half-acre piece of land in the Kimuka region, which is located about 40 km southwest of Nairobi, Kenya's capital, and is covered with healthy green leaves despite the scorching sun which is present in the surroundings.

Tarasha told Xinhua in a recent interview that her fortunes changed for the better when she began tapping free water from the Kimuka-Oloishoibor water supply project which was inaugurated in 2019 and is located a few kilometers from her compound.

"I now have access to water which is sufficient to irrigate my garden throughout the year irrespective of whether it rains or not," Tarasha said.

She added that before the project came to her area, she had to trek for at least two hours every day with a water container in search of the commodity and farming was not practical due to insufficient rainfall.

Tarasha said that currently, her vegetable farm in her homestead generates enough income to enable her to comfortably meet her daily needs.

"I also have clean water flowing to my house since I was connected to the water project through pipelines," she added. 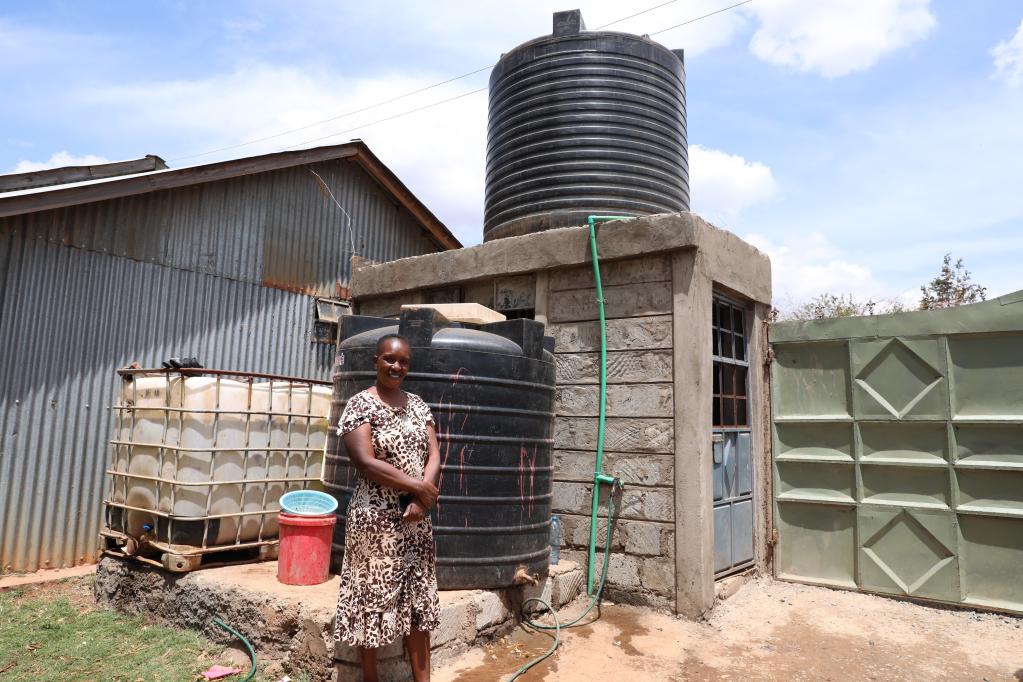 A farmer stands in front of a water storage tank at her home in Kimuka, Kenya, on Nov. 10, 2022. (Xinhua/Dong Jianghui)

The water project was operationalized after the China Road and Bridge Corporation (CRBC) which was constructing the Nairobi-Suswa Standard Gauge Railway (SGR) discovered an underground aquifer while drilling the 4.5 km Ngong tunnel.

In order to benefit the local residents, CRBC constructed two underground water reservoirs, each with a storage capacity of 800 cubic meters that holds the water before it is distributed to the community at no cost to consumers.

The water aquifer and reservoirs are currently maintained by AfriStar which is the operator of the SGR commuter and freight services.

Obed Kirwa, the Track Technical Supervisor at AfriStar's Nairobi-Maai Mahiu Workshop, said that since the water project was rolled out, the once-dry area is now a producer of various agricultural and livestock products.

Kirwa added that approximately 5,000 households and 10,000 animals are currently benefiting from the water project.

He observed that the area has largely avoided the negative effects of the ongoing drought due to the presence of abundant water resources.

Kirwa revealed that in order to ensure that the area has a continuous supply of clean water, Afristar has a dedicated team who regularly inspects the water aquifer to confirm that the system is operating smoothly.

He said that the underground water which was tested and found to be fit for human consumption has eradicated scarcity of the precious liquid in the arid surroundings.

"Before the water project was established, neighboring communities used to track for long hours by foot or using donkeys in search of water but now the issue has been solved," said Kirwa.

Liu Qican, who was a structural engineer for CRBC during the construction of the SGR, said that CRBC found it wise to harness the water resource for the benefit of the local community instead of letting the water go to waste.

Catherine Kanya, a teacher at Cradle Education Center which is located in the Kimuka area, said that her school was connected to the water project in 2019 which has become a big blessing because the school used to lack a reliable source of clean water.

"Before the water project came to being, we had to walk for about two hours each day in search of water," said Kanya.

She added that the school used to depend on water from a nearby dam but the problem was that it was contaminated which posed a major health challenge.

Kanya said that the project now provides clean water for cooking meals for students, watering their small farm as well as maintaining general cleanliness in the compound.

Beatrice Wanjiku Sekuda, the female owner of about 50 acres of land in the Kimuka region, is also a beneficiary of the water project.

"My land was mostly idle and left for animals to graze before I was connected to the water project," Sekuda said.

The mother of seven currently practices commercial farming on her land thanks to the water project which allows for irrigated agriculture throughout the year.

"I am now self-sufficient since I sell vegetables, tomatoes, and onions to the nearby towns," said Wanjiku.