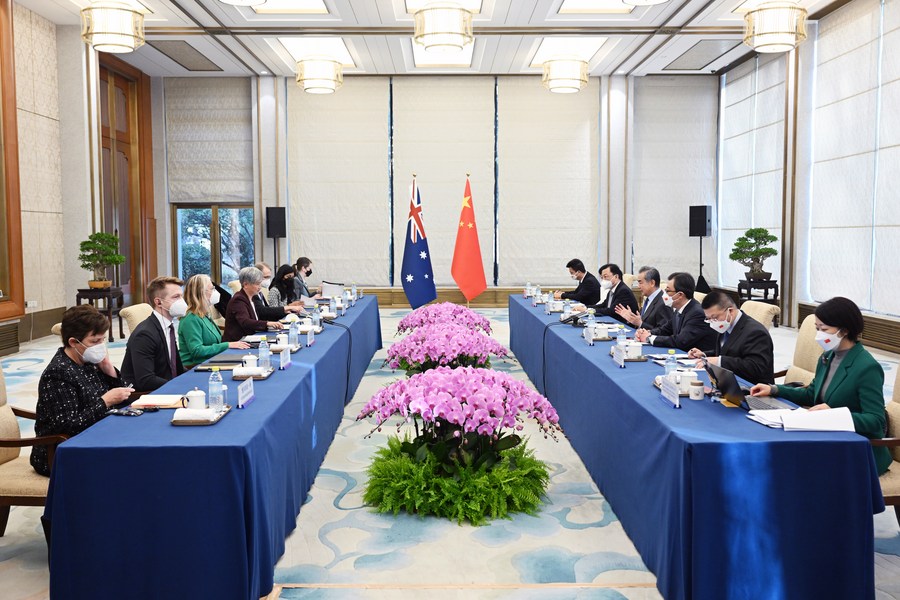 Wang, who is also a member of the Political Bureau of the Communist Party of China Central Committee, noted that Wong's visit coincides with the 50th anniversary of the establishment of diplomatic ties between the two countries and has symbolic significance.

China and Australia have neither historical grievances nor fundamental conflicts of interest, he said, adding that the two sides should and can be mutually-needed partners of cooperation.

Maintaining the healthy and stable development of the China-Australia comprehensive strategic partnership fully serves the fundamental interests of the two peoples, and is also conducive to promoting peace and development in the Asia-Pacific region and the world, Wang said.

China appreciates the willingness of the new Australian government to improve and develop bilateral relations, Wang said, adding that the two sides should jointly implement the important consensus reached by the leaders of the two countries to achieve this goal.

Wang said both sides should abide by the commitments made when establishing diplomatic relations, adhere to a correct mutual understanding and a mature way of getting along with each other, and maintain the stability of policies.

China and Australia should respect each other's sovereignty, territorial integrity, political systems and development models, refrain from interfering in each other's internal affairs, and treat each other as equals, he said.

Wang called on both sides to correctly view the differences between the two countries, recognize them, control them and transcend them. He said both sides should enhance understanding through contact and find mutually acceptable solutions through consultations.

Noting the complementarity of the two economies and the broad prospects for China-Australia cooperation in various fields, Wang said the two sides should make consensus and cooperation the keynote of their relations, expand common interests, and promote their development and prosperity to further benefit the two peoples.

Wong said the principles of mutual respect, equality, mutual benefit and peaceful coexistence set by Australia and China when establishing diplomatic ties have played an important role in promoting the development of bilateral relations.

A stable and constructive Australia-China relationship serves the interests of the two countries and the region. The new Australian government adheres to the one-China policy, properly manages rather than magnifies the differences between the two countries, and restores and develops communication and exchanges in various fields under the framework of the Australia-China comprehensive strategic partnership, Wong said.

In a joint outcomes statement issued after the dialogue, the two sides agreed to maintain high-level engagement, commence or restart dialogue in areas including bilateral relations, trade and economic issues, and regional and international issues, and support people-to-people exchanges.