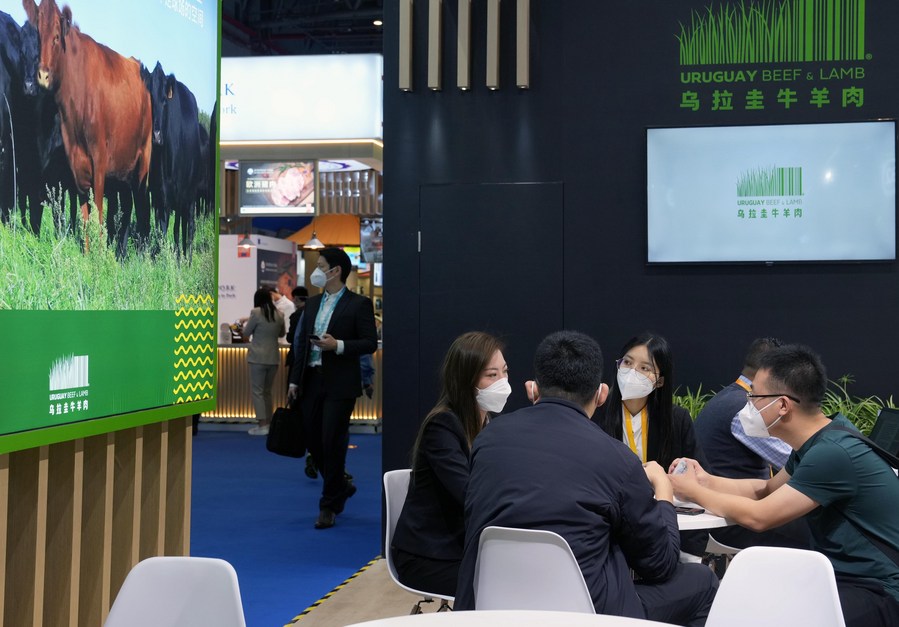 CHONGQING, Jan. 1 (Xinhua) -- Wang Dayu, a 65-year-old resident in southwest China's Chongqing Municipality, was busy shopping for the New Year in a local supermarket, with beef products from Latin America the must-buy item on his shopping list.

The imported beef from Uruguay, Argentina and Brazil, known for its premier color and taste, is recognized by Chonqing residents as an exquisite ingredient for hotpot and other local cuisine. In recent years, more and more Latin American beef has entered the local market, meeting a growing demand from Chinese consumers.

Latin America is China's largest import market for beef -- with the import volume increasing at a rapid rate. According to Uruguay's commerce ministry, China's beef imports from the country increased by 26 percent in the first half of 2022. Since 2015, more than half of Uruguay's beef has been exported to China every year.

The rapid growth of Latin American beef exports to China is attributable, to a certain extent, to the opening of a new logistics channel -- the New International Land-Sea Trade Corridor.

Launched in 2017, it is a trade and logistics passage jointly built by provincial-level regions in western China and ASEAN members. The trade corridor is also one of the key projects under the Belt and Road Initiative proposed by China.

With Chongqing as its center of operations and other western provinces as key nodes, the trade corridor allows goods to flow in and out of western China more quickly via multiple transportation modes such as railways, highways and water routes.

Thanks to the trade corridor, overseas food products such as Latin American beef have expanded their presence in China's western cities, along with other products from Belt and Road partner countries.

Benefiting from the Belt and Road Initiative (BRI), some of the company's beef products are transported to China's western regions via the new trade corridor. The corridor has reduced the logistics time for Latin American beef to western China by more than 20 days -- saving about 15,000 yuan (about 2,154 U.S. dollars) for each container, Zhang said.

Despite challenges brought about by the COVID-19 pandemic and economic headwinds, the expansion of the corridor has been accelerated since the start of 2022, providing a more efficient trade routes for China's inland cities and provinces such as Chongqing, Gansu and Hunan.

A total of 78 new logistics routes were launched in 2022, the highest for the past five years, data from the Coordination Center for Logistics and Operation of the New International Land-Sea Trade Corridor showed.

In the first three quarters of 2022, the volume of goods transported via Chongqing on the corridor grew by 29 percent from a year earlier to 105,000 TEUs, with the value surging 46 percent to 19.1 billion yuan.

During the same period, China's trade with countries along the Belt and Road totaled 10.04 trillion yuan, up 20.7 percent year on year, according to the General Administration of Customs. The value of imports expanded by 20 percent to reach 4.34 trillion yuan.

Noting that the continuous optimization of domestic epidemic prevention and control measures has given him more confidence about the future, Zhang said his company will further expand the market in western China and provide customers with more high-quality beef from Latin America.