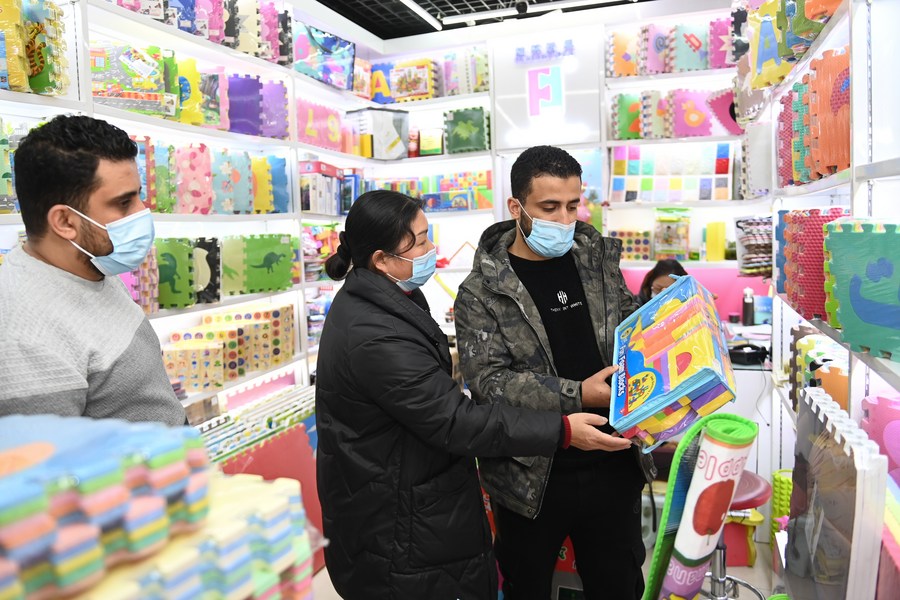 HANGZHOU, Jan. 19 (Xinhua) -- As soon as Marinella Fortino landed in China, she headed for the Yiwu International Trade Market in Yiwu City, east China's Zhejiang Province, to meet with her business partners.

"I missed Yiwu and my friends here very much during the two-year separation," said Fortino, a foreign merchant in Yiwu City with dual German and Italian nationality.

Yiwu City, often referred to as "the world's supermarket," has an abundant variety of commodities, convenient and fast logistics, and a good business environment, all of which have helped boost Fortino's foreign trade business since it was launched in 2017.

Fortino is among a surge of foreign merchants returning to Yiwu City after China optimized its COVID response and entry-exit policies on Jan. 8.

According to data from Zhejiang Provincial Yiwu Airport Management Co., Ltd., the number of incoming and outgoing flights on Jan. 8 returned to the pre-pandemic level.

Trading with 232 countries and regions around the world, Yiwu City is a global commercial city that had some 15,000 resident foreign merchants before the outbreak of COVID-19. But that number halved in the worst of times during the pandemic.

Returning to Yiwu has become the most pressing need of many foreign businesspeople.

Data from the local exit-entry administration shows that there are now over 10,000 resident foreign merchants in Yiwu City, about 70 percent of the pre-pandemic level.

"More foreign merchants will come back after the Spring Festival," said Mohammad Nasser, a Jordanian who has settled in China and has not been back home these last few years. He said that his friends have been asking him about China every day since China adjusted its COVID response policy.

"Nearly 90 percent of my clients have expressed their desires to come after the Spring Festival," said Nasser, chairman of Zhejiang Infinity Trade Co., Ltd. He said that his company has developed 100 new products for this year's market and has received orders worth over 40 million yuan (about 5.92 million U.S. dollars).

Liu Junming, general manager of a local sanitary products company, detailed China's latest entry-exit policies to his foreign clients through livestreaming and videos in different languages. He has arranged appointments with the majority of these clients after the Spring Festival.

Liu and his team are busy preparing new products for foreign clients. "We want to bring them surprises, making their trips worthwhile," he said.

On Jan. 1, 10 measures were officially implemented in Yiwu to improve the city's international business environment and foreign-related services, focusing on policy advice and convenience in the residence and work permit system for foreigners, among other areas.

"The Yiwu International Trade Market has attracted merchants from all over the world. They act as bridges linking Yiwu with the world, and are also promoters and beneficiaries of the booming market," said Wang Wei, vice mayor of Yiwu City.